CONSTANCE BAY – Residents battling the Ottawa River flood were buoyed this morning (May 1) by eye-witness reports the river did not rise as expected overnight.

But the fight continues for thousands of West Carleton residents all over the Ward 5 map as the flooding is well beyond the May 2017 peak.

Bernhardt is the communications director for the all-volunteer organization created after last fall’s tornado ripped through West Carleton. The WCDR raised more than $600,000 for those affected by the tornado.

The WCDR is made up of many volunteers who were active leaders during the 2017 flood. Never in their wildest dreams could these volunteers imagine they would be supporting the victims of two different natural disasters at the same time. The organization has been so successful in assisting those in need, they have been given precious office space at the very crowded Constance Bay community centre.

“It is a stress to our resources for sure,” Bernhardt said. “We’re trying to manage deployment of our resources.”

The WCDR has not delayed any of their programs to assist tornado victims while adding those now affected by flooding to their already full plate. Add that to the fact many WCDR volunteers are also battling the flood at their own homes. Bernhardt was one of the Bayview residents that had their electricity turned off last night. She says the house itself is high and dry.

But now there is a bit of a comradery for those battling various disasters in West Carleton.

“Many of those affected by the tornado have really rallied and are supporting us now,” Bernhardt said before taking a moment to compose herself. “Just saying that aloud” she trails off.

Bernhardt says the WCDR is moving forward on many tornado-related fronts including a tree planting program that will begin this spring, providing a communications network and continuing to lobby insurance companies who have failed to deliver support to their affected clients (a scary thought as a new wave of West Carleton residents prepare to make insurance claims).

The WCDR is also contemplating a fundraising effort (something they have proven very successful at during the tornado response) for those now affected by flooding. Currently the WCDR encourages those who have reached out to them to donate to the other volunteer organizations assisting in flood relief efforts.

The group may also become politically active in the flood battle as well.

“Premier Doug Ford was here saying he will do anything he can to support flood victims,” Bernhardt said. “And then the provincial government announces funding cuts to the Mississippi Valley Conservation Authority. Those things are diametrically opposed.”

Bernhardt says, while the battle is heartbreaking, the effort is heartwarming.

“It’s motivating,” Bernhardt said. “We do have more volunteers now. To have this support is wonderful. Karalee Plourde whose home was destroyed in 2017 is now a huge part of the volunteer effort.”

Volunteers of all ages and abilities are helping out wherever and whenever they can. On Allbirch Road, at the West Carleton Royal Canadian Legion, volunteers are providing a respite for those affected by, and battling against, the flood.

It’s an early start. Volunteers started working at 5:30 a.m. to make sure the Mennonite Disaster Relief team, hands down the hardest working group you will ever meet, are fed at 7 a.m. sharp. The Legion is also acting as a temporary bus stop for school children, a sandbagging station and a food production centre.

West Carleton Online dropped by this morning around 8:30 a.m. where four hard-working volunteers are beginning their day making about 200 sandwiches in time for lunch. They’ll make another 200 sandwiches for the afternoon as well.

They’ve been doing this since the beginning of the Easter weekend.

“We’ll be here for a long time, helping anyway we can,” volunteer Donna Kennedy said.

The Legion, as was the case in 2017, is another Constance Bay hub for disaster relief. Leon’s Furniture sent a team of volunteers to take over the cooking yesterday (April 30). The Almonte Legion also came and took over cooking duties for a day.

“People are constantly coming and going,” Taylor said. “The flood is a lot more widespread this time.”

When the morning sandwiches are made, more volunteers deliver the food because those on the frontlines don’t have time for a break.

“It’s crazy,” volunteer Joanne Ficker said. “People come in. Dirty, obviously from filling sandbags and they’re thanking us for this, while they are doing all the work.”

It takes many hands. The Legion has become a great place for news gathering as well. In short order West Carleton Online learned last night was the first night the Canadian Forces on hand spent the night in Constance Bay instead of returning to Petawawa (allegedly to support the community as the power was turned off). West Carleton Online passed a long convoy of soldiers on the Galetta Side Road around 8:30 a.m. on their way to Fitzroy Harbour. We also learned last night’s fire was started by flood water reaching the electrical infrastructure. And the best news yet. Many feel the river did not rise overnight as expected.

Although there are concerns about the potential snow, sleet and freezing rain forecast for today for a winter that just won’t let go.

Back at the community centre, West Carleton Online meets with Coun. Eli El-Chantiry. The centre has been completely overtaken with city staff and equipment, Canadian Forces personal and equipment, Ottawa Police Services (OPS), fire services, paramedic services and their equipment, a half-dozen disaster volunteer organizations and their equipment (reports say the Mennonite Disaster Service volunteers slept on the floor of the library) and of course the individual volunteers shoveling sand.

Coun. El-Chantiry is busy speaking with OPS personal trying to arrange support and equipment delivery to those who did not take the city up on its volunteer evacuation request. Bayview Road, between street addresses 600 to 956, has been closed and no one save emergency vehicles are allowed through.

The problem for residents that stayed behind is, once they leave the closed section, they won’t be allowed back in.

Coun. El-Chantiry takes a city vehicle to travel to the roadblock from the community centre. His own vehicle was hit by a deer last night while he was checking on the flood-affected in Vydon Acres. He’s okay, but the damage is near the driver-side door causing issues with entry, and that alone makes his own vehicle illegal to drive.

But that’s hardly the councillor’s focus. On the short drive to the roadblock, the councillor has a phone that won’t shut up with rings, and text notifications and all sorts of other sounds – 100 per cent of them related to residents battling the flood.

He’s talking to staff calling with issues related to food and tracking.

“What’s the solution?” he asks, suggesting he doesn’t need extensive details on the problem.

At the roadblock, there are residents in hip waders, a police officer preventing access and a few city staff members coordinating ways to assist those who have chosen to ignore the evacuation order.

The conversation is upbeat as several feel the water didn’t rise and have even heard “it dropped an inch in Fitzroy Harbour.”

“I have heard it went down a bit,” El-Chantiry said. “But that’s what the locals have said. I haven’t heard it from the experts yet.”

There’s a small station with fuel, coffee and sand. Officials don’t want vehicles going through. If a vehicle leaves the cordoned off section, they won’t be allowed to return. The road is dangerous, and the wake causes problems for homeowners.

That station will now be permanent during the flood to help support those who don’t want to risk leaving the cordoned off area. There will water and food and volunteer drivers on standby to assist with fuel purchases.

“I know we asked them to evacuate,” El-Chantiry said. “And several did. But those who stayed, we’re trying to keep them supplied so they can continue the fight.”

So, El-Chantiry has organized for a city truck to go through the closed area and do a supply run. The city is not allowed to deliver fuel, so residents will have to get to the supply station on the border of the roadblock to get fuel for their generators.

Next up for the councillor is to convince the Electrical Authority Board to go in to the area by foot and re-assess homes in hopes of restoring electricity to “help residents with the fight.”

El-Chantiry looks tired after more than 10 days of disaster response. Even when he goes home, there’s not much sleep to be had.

“Not really,” he said. “Even when you leave, it’s all you think about.”

And that phone doesn’t stop either.

“We’re stretched, there’s no question about that,” Mayor Jim Watson said in an interview today. “We are still providing regular city services. We may have to get the salt trucks on the road today and that will be an additional stress. Our first priority is still those dealing with the flood.”

Based on information provided by the Ottawa River Regulation Planning Board and the weather forecast from Environment Canada, the Ottawa River is expected to continue rising over the next several days.

4 thoughts on “‘More stubborn than the weather’” 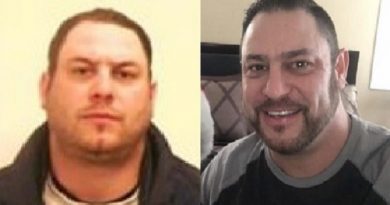 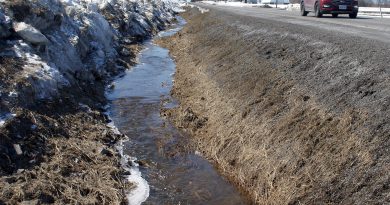