FITZROY HARBOUR – In 2014 Hans and Shannon Gartner bought a historic cottage on Kedey Island in Fitzroy Harbour. In 2017 the cottage, a former servants’ quarters dating back to 1947, was hit hard by at-the-time record flooding. In 2019 the extreme flooding made 2017 look like a dry run.

Their island was nearly sunk. There was no media coverage of the Kedey Island area during the 2019 flooding. Not even by us, and we were everywhere. That’s because no one could get out there.

But West Carleton Online was out there today (June 18). Part of a pontoon boat ride from the Fitzroy Provincial Park boat launch – roughly 800 metres directly across from Kedey Island. We were there to see the progress as the Gartners, CDS Construction and Triodetic MultiPoint Foundations raise the historic cottage several feet above its original height to protect the cottage from potential future flooding.

Kedey Island is a historic part of Fitzroy Harbour and all of West Carleton, and that history is one of the things that attracted the Gartners to the cottage.

“We really liked the history,” Shannon said. “The logging, the family ownership.”

Even Samuel de Champlain wrote of the area during his journey up the Ottawa River in the 1600s describing the Chats Falls as “beautiful noise.”

When Fitzroy Harbour was first settled in the early 1800s, the Kedey family farm was where the park is now. Kedey Island was used for the family herd of cattle.

“It was easier then building a fence,” Hans said.

But the island’s view of the Chats Falls, three miles of “beautiful wild water” stretching from the Ontario side to the Quebec side, soon caught the attention of humans. Rich humans.

In 1911, the Babin family build a two-story house on the property. In 1924 Benjamin Franklin Stapleton bought the property. An Ottawa millionaire who owned three theatres in the city. There was a handball court on the island – it’s still there. A working fountain with the interior painted gold (long since worn off). Stapleton kept the residents of Fitzroy Harbour busy too.

“He made so much money during the depression he hired locals to move all the rocks and build a canal, so he didn’t have to take his boat around the island,” Hans said.

Rich socialites took small steamships to the island to spend the day watching the falls. The Stapleton family hosted artist days where young artists would bring their equipment and easels and paint what they saw. In 1847 the Stapleton’s built the servants’ quarters that is now the Gartners’ cottage. It was the lap of luxury.

“A number of millionaires had cottages here at the time,” Hans said.

But in 1941 a careless mistake at the campfire led to the destruction of the Stapleton’s summer home. Two other cottages on the island at the time eventually fell down due to neglect.

Kedey Island is right below the dam. A little farther away then a good skipping stone toss. The water in 2019 was 14 inches higher than the extreme flooding in 2017. All the work the Garners did repairing their cottage in 2017 was destroyed again in 2019.

“The 2019 flood was something different all together,” Shannon said.

At the beginning of it, Shannon was at home doing her best while Hans was on a business trip. Then Hans returned and Shannon had to head out west for her own business trip.

“My colleagues told me not to worry,” Shannon said. “But it was on every television. I knew we were toast.”

The three decks the cabin had, one larger one for lounging, two smaller ones at the entrances,

“all floated off,” Hans said.

They had enough. Last December, the Gartners met with MultiPoint Foundations to see what could be done (we profiled the Arnprior company last April). They were going to lift their cottage. More than five feet. Well above the 2019 high water mark.

“These guys really had to work to raise this cottage,” Shannon said. “And lift it.”

They had to work fast. It was going to be challenging. Kedey Island is an island after all. With no roads on it and no access other than by small boat.

While MultiPoint Foundations imports their steel from the U.S., they do all their work at their Arnprior factory. The plan to get the foundation to the island was by snow machine. Over the frozen Ottawa River.

MultiPoint Foundations had to have the custom foundation material manufactured and ready to go before the middle of March. Meanwhile, Hans built skids the steel would be able to sit upon and be towed across the river by. They did it.

Then, the team had to wait for the spring melt to subside. When that happened, CDS Construction could get to work raising the house, putting the foundation together, and when ready, lowering the house on to the foundation. They boat out every morning and stay three until the workday is over, even eating lunch on the island.

“The load is distributed,” MultiPoint Foundations’ Peter Chabursky said. “Everything stays square and level. Everything is laser-levelled, and the foundation can adapt to uneven ground.”

Hans said the project will run about $80,000. The MultiPoint foundation costs about $20,000 with other costs related to transportation, lifting the house, construction and lowering the house.

“This system is giving us the greatest flexibility,” Shannon said.

The Gartners expect it will still be a couple of years before the entire project is complete. They will have to build a couple of set of stairs and other adaptions to the higher home.

But the good news is “I’m really getting used to this higher view,” Shannon said from the window of her raised kitchen. 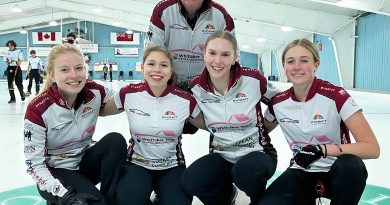