KINBURN – When you offer 32 years of convenience in Kinburn, you get a parade.

On Wednesday, June 17 the community threw a retirement parade for the Bal family who are retiring after running the Darvesh Gas and Grocery since 1987. The Bal family gave the definition of convenience new meaning in their level of service, and the convenience store became a major community hub for Kinburn residents. A look at the over-stuffed bulletin board at the store and the usual conversation between neighbours and the Bals happening at any hour of operation, proved that.

Mehtab and Manbir (AKA as Mandy) Bal came to the community, made a business and built a home right next door. It was a true family business with their children Amy, Raj and Balu working at the store as they grew older.

Originally the business served as an automotive repair shop until 2001 when Mehtab retired from the work. The business transformed to a convenience and gas store and in 2003 was approved to sell alcohol and lottery. In 2005 the store was completely rebuilt and removed the garage altogether.

One thing that didn’t change was the business’ commitment to service and the greater community appreciated that. Early Wednesday evening, that Kinburn community threw the Bal family a surprise parade (the second parade West Carleton Online covered that day – ‘tis the new world order). Nearly 50 vehicles participated including the Kinburn fire stations’ shiny trucks and was led by Coun. Eli El-Chantiry.

After the parade many dropped by the store to wish the family congratulations on the retirement and the selling of their family business. The Bal family’s last day was to be the next one (Thursday, June 18).

“We have beautiful memories here in Kinburn,” Mandy told West Carleton Online. “Nothing but love and affection. We made something for the community that will be here for a long time. Kinburn is a beautiful community to live in. We say thank you to everyone.”

Having said that, Mandy says 32 years is long enough, and now it’s time to spend some time with family.

“I’m going to spend some time with my two grandchildren,” she said.

Kinburn’s Jayne Coady was one of the organizers of the parade. It was important to her to recognize the Bal family and their contribution to the community.

“The Bal family have been the heart of the village,” she told West Carleton Online. “They care, they share and support all that our little place and space has provided in their time with us. They are gracious people.”

Leo and Barb Enright, current Arnprior residents who spent much of their many, many years living in Kinburn, neighbours to the Darvesh Convenience Store. They made the trip out to participate in the parade and pass on their congratulations following the parade.

“It was a long one,” Barb said of the parade. “Balloons and streamers. It was great.”

The parade also served as a reunion for many current and former Kinburn residents stuck inside due to the pandemic and its social fallout.

“Lots of old friends were here,” Leo said. “I think we knew everybody.”

The Bal’s sold the business to Anil and Anupma Verma of Toronto who officially took over the business at the end of April. 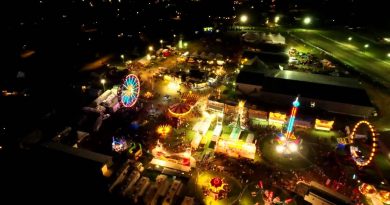