Last Friday, West Carleton Online, under the guise of the publisher’s, ahem, monthly column, published the Top 10 most read stories of 2021.

After doing the math, those 10 stories only represent roughly 0.5 per cent of all the stories West Carleton Online published in 2021. That’s a pretty small sample of what we here think, has been a pretty great year for coverage of our community.

We feel there are great stories being published every week. Some of them are real winners but fall through the cracks anyway. Sometimes these stories don’t rack up the pageviews because they are available to our subscribers only.

Sometimes a great story gets buried by a busy news week, there’s no denying some weeks produce better news than others. Or maybe a bad headline hides a great tale. Our headline stories featured in our rotating front page photos, have very limited headline space, five or six words max, and our publisher absolutely refuses to write a headline that doesn’t fit that space.

Maybe you just don’t like the same stories I do.

Whatever the reason, West Carleton Online publisher Jake Davies shares 10 of his favourite stories from 2021 (which did not make the ‘most read’ list).

Also included in the story is West Carleton Online’s annual Faces poster (click above, or scroll to the bottom), featuring 49 of our favourite photos featuring many of the faces we have met over the last year – many new, many old, several masked, but all with smiles. See how many your recognize and tell us your favourites stories from the last year in the comments below, we’d love to hear from you.

Dunrobin on the catwalk

Stonecrest wakes up to ‘cowtastrophy’

Honestly, it’s nearly impossible to pick just 10 favourites in a whole year of West Carleton stories. This list had no room for the return of the Carp Fair; the West Carleton Wolverines Football Club returning to play; Constance Bay’s Jeanne Gauthier’s incredible meals for seniors program; Jen McAndrew at Black Barn Farm; and so many others. Honestly, the list changes from day-to-day.

We hope you have enjoyed our year of coverage of the West Carleton community (and its neighbours) in this very strange year. We could not have done it without the support of our subscribers, our advertisers and our contributors. Thanks to your support, West Carleton Online is doing something I was unsure would ever be a possibility, and that is continuing to exist after four years. We do hope to grow, and to expand, and to add more voices and more writers and more news covering a community I have been a part of for almost 50 years, but we need continued and increased support to reach those goals. In the meantime, thank you for making West Carleton Online, not only the Number One source for news and information on West Carleton, but in our humble opinion, the best community journalism media outlet in all of Ottawa. 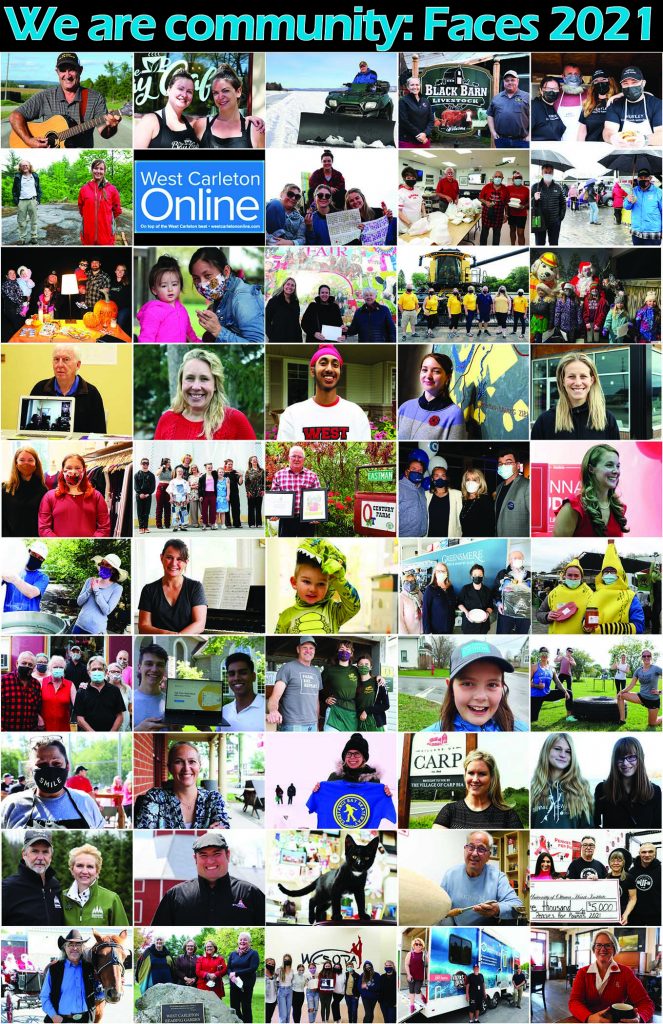