KANATA-CARLETON – While politics has always been about charm, leadership, values and policy, having a little spending money sure doesn’t hurt.

In the 2015 election campaign, the Liberals spent a declared $114,216.22, the Conservatives $98,315.02, the New Democratic Party $24,279.11 and the Green Party $8,506.35. The results followed suit with Karen McCrimmon winning her first term with 51 per cent of the vote over Conservative Walter Pamic. Andrew West of the Green Party came last with under three per cent of the vote.

While party expenses aren’t yet available for the 43rd Canadian general election, it can be safely assumed they will follow a similar pattern.

Budgets and their advantages aren’t necessarily visible to the naked eye for those on the receiving end of door-knocking visits or those who attend all-candidates meetings. But they are painfully obvious on Election Night.

The Liberals have rented the back room at the Lone Star Texas Grill just off March Road in Kingston. The event is catered with a never-ending supply of food (of which we had some). Free soft drinks too. There’s a small stage set up and a sound system ready to go. Lots of Liberal red decorates the room.

The Conservatives are throwing a pretty nice event as well. West Carleton Online wasn’t there, but the Kanata-Carleton Conservatives have rented the Crazy Horse Salon in Centrum for their party. They have a pretty elaborate stage set up for candidate Justina McCaffrey’s victory speech, which never comes.

Just down the road from the Liberal party is the Green Party campaign headquarters, also off March Road in Kanata. For tonight, it’s doubling as the supporters’ party location as well – no room in the budget to rent an additional space. They have snacks too (and we had some there too). Volunteers bought them at the grocery store on the way to the much smaller, more thrifty Green Party Election Night event.

West Carleton Online dropped by the Green Party party around an hour before the polls closed yesterday (Oct. 21) at about 8:30 p.m.

Another noticable difference between the two big-budgeted parties and the smaller political parties’ campaigns is the candidate is actually at her own event. Tradition at many Conervative and Liberal Election Day parties this reporter has covered is the candidate doesn’t make an apperance until after the riding has been publicly declared. Even the NDP’s Paul Dewar in 2006 stayed out of site until he officially won during a swank celebration at a rented hall on Preston Street in Ottawa Centre.

Purdy, a smart and accomplished Dunrobin resident, is sitting with her supporters chatting while other volunteers are already breaking down the rented office space, packing up election signs and getting ready for the inevitable clean-up. There is a television set up on a small table displaying the election coverage.

“We got a really good deal on this place,” Purdy tells West Carleton Online. “It’s right beside my clinic and the landlord is a Green Party supporter.”

Deals matter when you are running a campaign against parties that have budgets more than 10 times your own.

You cut costs wherever you can. When West Carleton Online wanted to interview the Conservative or Liberal candidate, we contacted the campaign’s communications director. Emails went back and forth. Sometimes campaign managers and other party members got involved in the process. You didn’t speak to the candidate until the time of the interview. For the Green Party, the NDPs and the People’s Party of Canada Kanata-Carleton candidates, you spoke directly to the candidate on their own phone, or through their email or social media. The candidates handled their own media.

Purdy is a retired member of the military. She now runs her own small medical practice in Kanata. She lives on a small farm with her husband just outside of Dunrobin. None of that prepared her for being a federal election candidate.

When asked if being a first-time politician was a learning experience, the answer is obvious.

“Was it ever,” Purdy says from the front room of her next door clinic – a quiet spot away from the campaign party. “You hear you are going to be busy and you hear it’s going to be hard work. You don’t know until you’re in it.”

While Green Party support is small in Kanata-Carleton, Purdy ran an excellent campaign and proved herself a worthy candidate.

“I got nervous before every debate and of course I’m nervous tonight,” she said.

Purdy stood out at each and every all-candidates’ debate she attended – which was all of them. She offered common-sense solutions to current political problems. Not only was she well-versed in her own party’s policy, she seemed to know each of the other party’s platforms very well too – in some cases better than the party’s own candidate.

“Her answers were not sufficient for something of that importance,” Purdy said.

McCaffrey would garner more than 19,000 more votes than Purdy when the election was over.

Purdy didn’t launch personal attacks on other candidates, she focused on the parties’ ideas – good or bad.

“No, the Greens are not supposed to engage in personal attacks,” she said. “But you look for holes in the policy. We’re facing some pretty serious challenges, not just the climate. Do you not want your best and brightest? Someone who will show up when it’s difficult? If you can’t face your constituents, how are you going to face the other side in the House of Commons? There’s a responsibility.”

More than a few West Carleton residents told West Carleton Online they were very impressed with the candidate, if not her party. Purdy likens party politics to a cringe-worthy time in all adults’ past.

“The partisanship,” she said. “The Ethics committee. The silence on SNC Lavalin. Decriminalizing drugs. We know that’s the most effective way to deal with that issue, but no one will address it. They’re basically high school cliques. You are not serving your constituents.”

A well-wisher interrupts our interview to share some thoughts with Purdy.

“I like how you made it in to a war on the environment,” the man says.

Purdy wasn’t just battling with a smaller wallet, sometimes she felt she was battling against big media opinion as well.

“The larger media was focused on red or blue,” she said. “If they mentioned it at all, it seemed like they were forced, to mention the NDP.”

In a Citizen story covering an all-candidates debate, the last sentence read ‘and People’s Party of Canada candidate Scott Miller was there as well.’

But at this point in the evening (9 p.m. on Election Night – a half hour before the polls close), Purdy is still full of optimism. You don’t lead a campaign if you don’t think you can win.

“I know it’s a longshot, but I like to dream,” Purdy said. “We’ve exchanged phone numbers with the others (candidates, for after the winner is declared). I’m an optimist, so I’ll be disappointed if we lose.”

No matter the outcome Purdy, whose previous involvement in politics was the odd financial contribution, says she plans to keep fighting.

“This has been lifechanging,” she said. “I can’t go back to the way things are. I know I may still have to win a nomination. I’m very shy. It was so difficult making calls, door-knocking, asking for money. But I have to keep going.”

That’s down the road. Whatever happens tonight, Dr. Purdy has a busy Tuesday, Oct. 22 ahead of her.

2 thoughts on “Green’s Purdy battles on a budget” 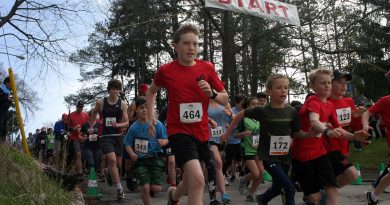 City sets road safety priorities for the next year