CORKERY – Becoming a double-amputee at 57-years-old, is as traumatic an experience as one can have after middle age. But Corkery’s Linda Mulligan, with some help from community angels, is learning to walk all over again at 59 after mastering the skill 57 years earlier.

Mulligan, in May of 2018, was diagnosed with a blood infection. She had one day to choose between amputating her leg in an effort to beat the infection or dying within 48 hours. A tough choice with not a lot of time to make it.

“You don’t know what you’re going to do until you have to do it,” Mulligan told West Carleton Online from her kitchen table Wednesday, Sept. 8. “They gave me 24 hours to decide. Another lady in the hospital couldn’t decide. She passed away.”

A year later, Mulligan was back to work at the job she loved working for Scotiabank as a product advisor.

“I was back to work, I had learned to drive with one foot,” Mulligan said. “The other leg started swelling up. They got 98 per cent of the infection out and a year later that two per cent came back and went to my right leg. That was even harder to make that decision. That was real turmoil.”

But she made the decision, and Mulligan now has no legs below her knees, and two years later is still adjusting to a brand new way of getting around than the methods she relied on for 57 years.

“The first thing I had to learn is how to roll over in bed,” Mulligan said. “After five days in hospital they said I could go home. We (including husband Glenn) were like ‘okay, what are we going to do?’”

There was extensive rehab for Linda after losing her first leg, and healthcare staff there was nothing new for them to offer after losing the second one.

But Mulligan still had to learn how to transfer from beds to chairs to wheelchairs and learn a whole new way to be mobile.

“I learned a lot of stuff, believe it or not, from YouTube,” Linda said. “I fell a lot. Your brain forgets you don’t have a leg. It was totally different. Simple things like brushing your teeth, brushing your hair, even looking out the window. It’s been challenging for all of us.”

Linda’s had to build new muscles to do the work her feet, ankles and calves used to do. Her legs, fit in to a special harness, that is attached to artificial feet and lower legs. The artificial feet have robotics in them that allows the ankle joint to adjust to changes in the level of the ground.

While insurance covered the legs, which come in at roughly $300,000 to $400,000 for the pair, it does not cover some of the other specialized equipment needed to fit in the legs. Linda says she has two sets of silicone socks that cost $900 each. Linda still doesn’t have her permanent leg because the legs she has remaining are still shrinking.

“If you don’t have the muscle, you can’t walk,” Linda said. “Your heart has to be healthy because you use so much energy when you walk. Everything is planned. Every movement you make is thought through. If you just get up and go, you’re going to fall.”

Two years later, Linda’s second leg is still swollen. Linda says she’s one of the lucky amputees as she does not suffer from phantom pain, too much. For some, it’s almost unbearable.

Linda and Glenn have a daughter Crystal who lives in Stittsville with her family, who has also been supporting her mom’s recovery.

“They have been my saviours,” Linda said. “They were scared to leave me alone.”

It has been more than just learning how to get around in a wheelchair and on her new prosthetic legs. Linda has changed her whole lifestyle.

“I quit smoking,” Linda said. “I calculated it takes 20 minutes to have a cigarette. I calculated how much time I had wasted. I had to let it go. After the second leg, the doctors checked me, every single organ, and I was 100 per cent clear. Why would I take a chance with a cigarette?”

She hasn’t had a cigarette in three years. Linda says staying positive is challenging at times, but she can’t continue to move forward without looking up.

“It’s a whole different life experience,” Linda said. “What saved me from depression was going back to work. There was no way I was going down in that black hole. You allow yourself that 15 minutes of self pity, by yourself. Then you pull yourself out of it and set goals. Even if it’s something small. If you’re not careful that hole can swallow you up. I love my job so that was my goal to keep me going.”

But it has been challenging emotionally.

“It took me two years to tell all my family I lost me second leg,” Linda said. “Why? I couldn’t tell you. I just had to process it. I didn’t want the ‘poor you’ thing. You want to go up, not down.”

Linda and Glenn, who met at 17-years-old, have been inundated with new costs and big bills since the last surgery.

“They give you a list of what you need at your home, or you are not going home,” Linda said. “If your home doesn’t meet those standards you are sent to a long-term care home. If I didn’t work, I would have been eligible for grants, but I didn’t want to quit. I love my job.”

The Mulligans moved out to Corkery in a home they built 25 years ago.

“The first thing I had to do when we moved here, was learn how to drive,” Linda said. “You can’t really live out here if you don’t drive. Then I had to learn to drive all over again. Using hand controls. I was scared out of my daylights.”

It cost Linda $4,000 to get her license back. She also had to retrofit her car with hand controls and take a training course on how to use them. A steering wheel knob bought at a truck stop costs about $20. An approved one for medical assistance runs about $150.

One of the big items was a $10,000 lift outside the home that gets Linda and her wheelchair to the main floor of her bungalow. She says a ramp was costed out at $15,000 and would have stretched half-way through her backyard.

“Every time you turned around there was a new cost,” Linda said. “Once you get inside the house, we had to figure out how to get around.”

The main door is a narrow entrance with a wall immediately in front of the entrance. All the doorways were too narrow for a wheelchair. Fixtures, appliances, rooms, stairs, everything in the house was clearly designed for able-bodied people.

It’s an expensive project and the couple needed professional and financial help to make it happen.

Linda submitted an entry in to the radio station’s Boom Community Angels program. Listeners could make a request for help, and a team of skilled labourers, contractors and suppliers would get to work to help those in need.

“Through the pandemic I became aware there was a huge demand for tradespeople and many people were having a very hard time getting in touch with one, even when they really needed it,” Mark told West Carleton Online Monday (Sept. 13). “I talked to my friends who work in the trades, many of them sole independent operators who said they were simply beyond busy. So, I started reaching out to some of my friends and talking to them about those who really needed help in this pandemic, people who had suffered job loss, illness, loss of benefits, etc., and I started putting together a roster of ‘angels’ who offer free labour and give the clients the same cost of materials they pay. Some get 100 per cent donations from their suppliers too.  We are always working at keeping the costs low, low, low even in very expensive times. I worked with my bosses at Boom (Chorus Entertainment) who were only happy to help me bring this to the air.”

The Boom Community Angels have attacked four projects so far with a fifth one to be announced later this month. Linda was selected as the fourth recipient of their help.”

Linda’s homes need doors and frames replaced to be wheelchair accessible; her bathroom upgraded so she could take a shower; and other jobs to make the home more fully accessible.

While work hasn’t begun yet, it has been all planned and approved.

Contractor Dan Bray (Vail Reno’s and Eco-Friendly) is leading the project that will see six door frames re-sized (Bray is donating 50 per cent of the cost of the material and 100 per cent of the labour); a new wider, more accessible back entrance door; electrical relocations (LIT Electric); floor repairs and finished new walls. The work would roughly cost a homeowner $20,000 to $30,000.

“Linda Mulligan cried the day we visited her in Carp,” Mark said. “My favourite day of the month is the call I get to make to give someone who is struggling, some good overdue news.”

“I heard it on the radio, and I was like oh my God,” Linda said. “I told my husband we’re going to do this. We had run out of money. When they drew my name, I started crying. It’s going to set us up. This is the biggest job we had left to do. This is our forever home. We built in in 1990. Never even thought about it being handicap accessible. We’re really stoked about this. The Boom Community Angels really came through for us.”

This was a win for Linda which will allow her to focus on other steps in her recovery.

“I can focus on other things, like learning to walk, and that has saved me,” she said. “Five weeks down the road I was walking and at some point, I’ll be walking normally. It’s all coming around. It just takes time and patience. There was no way in hell I was going to let depression win. How bad do you want it and how much work are you prepared to do? Because it’s not easy, but it is worth it.” 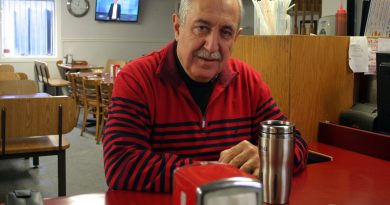 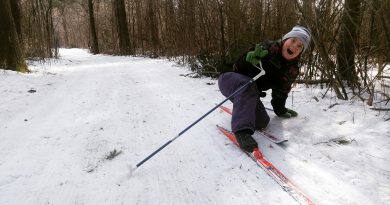