WEST CARLETON – In an effort to move forward as an organization, West Carleton Disaster Relief (WCDR) is focusing on a proactive approach to help West Carleton residents deal with potential disasters before they happen.

The goal is to mitigate damage in the event, heaven forbid, a disaster was to strike the community again. The WCDR’s current focus will be on forest fires and damage mitigation resulting from such an event.

Starting mid-July, every resident in West Carleton will receive a pamphlet in their mail from WCDR entitled Wildfire Ready.

It is a comprehensive document highlighting mitigation techniques and preparedness ideas in the event a forest fire strikes the community.

West Carleton has been home to three major natural disasters that hit in a three-year span starting in 2017. In 2017 extreme flooding struck the area in spring, specifically the many waterfront communities in West Carleton along the Ottawa River. In 2018, a tornado tore a swath across West Carleton from west of Antrim all the way to the Ottawa River east of Dunrobin doing much damage along the way, especially to the community of Dunrobin (our first story of many in continuing coverage of the tornado). In 2019, extreme flooding was back, but this time far, far worse than 2017 (our flood coverage was daily for months – and continues to this day – a link to several stories on the record-breaking flood).

During the 2017 flood, a group of volunteers formed Constance Bay Flood Relief to help those affected by the devastating damage. In 2018, several of those volunteers joined some new volunteers to create WCDR to assist those affected by the tornado. WCDR raised hundreds of thousands of dollars and led the charge politically as well. Less than seven months later WCDR, still dealing with the fallout of the tornado, mobilized again to help an even larger group of community members deal with the fallout of record-breaking flooding in the spring of 2019.

While work still continues today on recovery from both the tornado and flooding, the group was had a bit of a chance to catch their breath and re-focus.

“During the flood and post-flood, we were actively involved,” Makin, who is also the Huntley Community Association president, said. “We had a chance to catch our breath, to look ahead and do some planning.”

The WCDR had planned a public meeting for May 3 on the potential of a forest fire and safety measures and was set to present a panel of experts in regard to potential disasters in the area. Of course, the global COVID-19 pandemic forced the cancellation of that meeting.

“We feel a forest fire is the greatest threat to our community,” Makin said. “We’re not looking forward to it, but we are preparing for it. It has happened before and with the dry, hot weather it is a threat.”

The most well-known incident is the Great Fire of 1870. On Aug. 14 of that year a drought following several months of rain-free days resulted in a fire (although the cause isn’t exactly clear) that engulfed Lanark, Fitzroy, Torbolton, March and Huntley townships. Strong winds helped the fire travel at speeds of 10 miles per hour. At one point the fire stretched from Almonte to the Ottawa River.

The Carp Bush Fire of 1955 also had devastating effects. The fire began in Kinburn around July 22 and burned approximately 1,5000 acres. The fire frontage was reportedly five miles wide and burnt in Huntley, March, Fitzroy and Torbolton townships. For more extensive coverage on these two fires, click here.

There have already been some close calls this year. On April 27 there was a bush fire in Galetta and in MacLaren’s Landing on the same day. On May 6 there was a brush fire near Carp just roughly 50 feet from homes along Hidden Lake Crescent. Just three days ago (July 6) there was a fire in a hay field just outside of Kinburn.

“The fire at the edge of Carp was a wake-up call for many people,” Makin said. “It has happened before, and with the dry, hot weather, it is a threat. We changed gears from the meeting and put all the information into a pamphlet.”

The pamphlet is filled to the edges with information that may save your property and even your life.

From securing preventions zones around your property from the house to 100 metres away. What to do before a wildfire, what to do during a wildfire and what to do after a wildfire. Advice that may not be top of mind but could save your home.

“We spoke to District 6 Chief Bill Bell,” Makin said. “He was willing to be part of the panel for the proposed meeting and I have been in touch with him several times through the process. We consulted local experts and connected with Fire Smart Canada. This is information that came as news to me as a homeowner.”

For example, most homes that burn in a wildfire are started by wind-blown sparks and embers that can travel up to two kilometres in a forest fire.

“Part of it is luck, I guess, but there are things you can do,” Makin said.

Making sure you have a non-combustible surface extending 1.5 metres around the entire home, decks and any attachments is the first step. This can be as easy as clearing vegetation and combustible material down to the soil. Or you use materials such as gravel, brick or concrete for added security.

“There’s lots of things you can do to prevent fires from getting out of control,” Makin said.

But it’s not just about protecting your home. You have to protect yourself and your loved ones as well.

Have an emergency supply kit ready to go.

“A backpack is probably the best,” Makin said. “We learned from the tornado you need copies of important documents ready to go.”

Have a family disaster plan. A sample is available on the WCDR website.

“It forces you to think about all the various scenarios,” Makin said. “What do you do if you have a dog? Where can you go? What do you do if you are at work and your kids are at home? We’re suggesting during fire season (spring to fall) you put the pamphlet on your fridge.”

Makin says the committee has spent more than 100 hours working on the project and the pamphlet.

Makin says the goal is to have the finished pamphlet at Canada Post by Wednesday, July 15 and then it should be in homes three to four days after that.

Makin says this project is the first of many that will help establish WCDR going forward.

Download Fire Smart Canada’s Fire Smart Begins at Home app to do a complete self-assessment of your home: https://firesmartcanada.ca/programs-and-education/firesmart-begins-at-home-app/

One thought on “WCDR’s proactive response to disaster”

Hwy. 417 on-ramp at Pinecrest to close March 1 to November 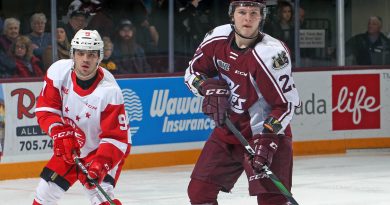 Carp’s McTavish migrates back to Peterborough after NHL taste