CONSTANCE BAY – It was windy, the sun was bright and hot, and two ministers made an announcement West Carleton residents along the Ottawa River have been waiting to hear for a long time. Kind of.

Kanata-Carleton MPP Dr. Merrilee Fullerton and Minister of Natural Resources and Forestry, Renfrew-Nipissing-Pembroke MPP John Yakabuski stepped up to a microphone placed just feet away from beachfront in Constance Bay near The Point Dining Lounge yesterday morning (July 18) and told the gathered media they have found their special flood advisor.

Two months and 17 days after the Ottawa River peaked during extreme flooding this past spring, the Conservative government has appointed George McNeil as a special advisor to “advise the province on ways to reduce the impacts of flooding and ensure communities can recover quickly.”

McNeil has 36 years’ experience in public service and water resource planning. He played key roles in the 1997 “Flood of the Century” on the Red River in Manitoba and led the Floodway Expansion project which included a provincial review of floodway operating rules and flood protection studies of mitigation measures for Winnipeg. McNeil will earn a per diem that has a maximum cap of $60,000 and may be assigned staff “as he needs it.”

There is “no specific date” for his report but the ministers expect it will be filed some time next fall.

Yesterday, Yakabuski assured the media McNeil will “look at all the operational aspects.”

Yakabuski said his government is also still pushing for a full independent review. Last Thursday (July 11) he wrote a letter to the other major players in the management of the Ottawa River including Quebec Minister of the Environment and the Fight Against Climate Change Benoit Charette, federal Minister of Environment and Climate Change Canada Catherine McKenna, federal Minister of Public Services and Procurement Canada Carla Qualtrough and federal Minister, Fisheries and Oceans Canada Jonathan Wilkinson requesting their support “in conducting an independent review of how the Ottawa River system is managed.”

Yakabuski’s letter went on to state “we need to learn everything we can from the flooding that occurred this spring and use that knowledge to find ways to prevent such devastating impacts from happening in the future… Please contact my office at your earliest convenience acknowledging your support to conduct an independent review of the flooding that occurred along the Ottawa River.”

MPP Yakabuski first announced, in a story West Carleton Online broke, the government would appoint a special flood advisor at a June 24 meeting in Arnprior. At that time, he also spoke of an independent review. He told West Carleton Online the special advisor was something the provincial government could get done “in a timely fashion” but an independent review would take the cooperation of three different governments and several organizations.

One gentleman in yesterday’s media scrum looked a little out of place. Even for a summertime press conference scheduled in the morning, on a beach, he looked a little too casual to be a member of the media.

Just the same, holding his cell phone aloft, Constance Bay resident Paul Graveline managed to squeeze in a question to the ministers, just like a pro.

“Is this going to hold up Disaster Relief Assistance Ontario (DRAO) claims?” he asked.

“No,” Yakabuski replied. “In fact, we have streamlined that system.”

Graveline says he learned about the press conference while enjoying his morning coffee at the Lighthouse Restaurant. He thought he would come on down and hear it straight from the horse’s mouth.

Graveline, 71, lives on Bayview Drive, in the section that had its power cut during the flooding. He and his wife were out of their home for 45 days.

An engineer has recommended it be torn down.

“We’re back in the house,” Graveline told West Carleton Online. “We either have to lift it or demolish it.”

The Gravelines have their application in to the DRAO, but don’t know if they will be approved for anything.

He and his wife have been retired for about 10 years. They don’t have a mortgage, but now they have a heavily damaged home.

“I have to wait for some funding before I do anything,” Graveline said.

During the flooding, he and his wife were staying in an RV near their home but had also rented another place in the Bay. He spent $1,000s in gas for the generator to keep pumping the water, a rented storage can and other related costs.

“This is our dilemma,” Graveline said. “We’re retired. Do we want to go in debt again? I say let’s get it done and over with.”

West Carleton Online caught up with Coun. Eli El-Chantiry at Week Three of the Concerts in the Park music series in Fitzroy Provincial Park last night (July 18) nine hours after the announcement.

He said he called Yakabuski to thank him for his work.

“I told him when we started this, you and I were on different pages,” El-Chantiry said. “Today is a new day.”

El-Chantiry is happy to hear the province has appointed a special advisor, but more needs to be done on the flood file.

“I appreciated that, but an advisor is not what people are looking for,” he said. “It’s a step in the right direction, but the people want a full independent review. We have to know what happened. If it’s not human error, then maybe we have to change our building laws.”

“This is all good, but this isn’t the review people are looking for,” he said. “They want a management review. They (the Conservative government) are going to own this. You can see it on Facebook, people aren’t accepting this (the appointment of the special advisor).”

During Yakabuski and Fullerton’s media tour, they joined The Moring Rush with Bill Carroll on CFRA Radio to talk about the announcement. During the interview Carroll called El-Chantiry a conspiracy theorist in reference to the spring flooding and his repeated calls for an inquiry. The ministers didn’t bite, but did offer polite laughter.

“I’m the one with the tinfoil hat,” El-Chantiry said. “Anyone listening to the show would ask if I’m a conspiracy theorist. Well, if that’s true, why are they bringing in an advisor?” 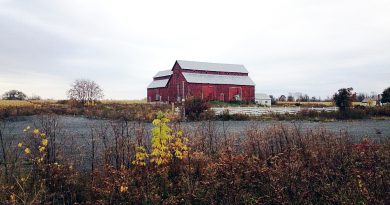 Are you on the Voters’ List for the 2018 Municipal Elections?