WEST CARLETON – The so-called second peak arrived by all accounts yesterday (May 12) in West Carleton and now it could be a week or more before the water recedes enough for homeowners to begin focusing on recovery and assessing the damage. And it could be a lot longer than that before anyone gets a handle on why the flooding has been so historically bad the last two years.

It’s relatively quiet in Constance Bay Sunday morning. The NorthWind Wireless Fiber Centre has a third of the vehicles in it compared to about a week ago when the parking lot was filled with emergency vehicles of all services, large trailers, large earth moving machines, dump trucks and hundreds of sandbaggers. At that time, the road was closed to only priority vehicles and the long line-up of vehicles waiting to load up with sandbags.

Now, instead of a huge pile of sand, there is a huge pile of sandbags – thousands. For the most part, all the houses that needed sandbags now have them. Now it’s a long, exhausting waiting game. While this latest peak did not quite match the original peak of May 2, an exhausting 10 days ago, it’s still high and homeowners are still battling, reinforcing sandbag walls and monitoring pumps, trying to keep as much water as possible out of their homes and desperately hoping to out-wait the high water.

Around 10 a.m. at the West Carleton Royal Canadian Legion, Branch 616, volunteers are just cleaning up from breakfast for about 40 exhausted people. There is hot French Canadian pea soup in the crock pot and sandwiches at the ready as well as many other snacks and drinks. The Legion has been feeding anybody who walks through its doors every day since sandbagging operations began near the end of April. They have been getting by on the extraordinary efforts of volunteers and food donations. Service organizations, including many nearby Legion branches, volunteer their time to take over the cooking duties on specific days. But most of the volunteers are Constance Bay residents whose homes are dry. It’s a place to get food, but also to relax and have a much needed laugh.

A few tired-looking people wearing hip waders, wander in pack up some food and head back to work.

Just before noon Paul Graveline and his wife Maggie and a couple of retired neighbours come in, grab some soup and a sandwich and have a seat. All of them are in good spirits.

Paul and his wife moved out of their home, at 922 Bayview Ave. on April 26. It’s in the section that has its power cut off and is closed to traffic. Paul, 71, is 10 years retired. They are staying in a Recreational Vehicle parked on the road near his house. He is working in three-hour shifts keeping his four-inch pump going. He has a two-inch pump at the ready.

“We are as prepared as we can be and the rest of it is up to God and Hydro,” he tells West Carleton Online. “It’s all worth it in the end if it holds.”

Paul says today is the first day they got the keys to a nearby rental they can sleep or shower in, though they are going to stay in the RV until they don’t need to pump anymore. The Gravelines head to the Legion about three times a day, Paul says. And they’re showering at the community centre. Paul says he has probably spent $850 in gas just for the generator. He rented two large storage containers to store furniture in. Then he lifted those storage cans 16 inches off the ground to try to keep the contents dry. And when that wasn’t going to be enough, he rented a truck to take them to safer ground. He and his wife are also helping their neighbour who’s a widow.

“Yeah, for sure,” Paul said. “But the help’s been great. You put a call out and a group of people are here before you know. There’s about three feet of water in the crawl space but we’re holding for now.”

His son and grandson have also been here “right through.”

Paul says his time in the sheet metal industry gave him opportunity to visit many dams over the years. A popular theory making the rounds in the West Carleton community is the dams are holding back too much water during the winter to generate electricity.

Words we’ll here again. Paul was born and raised in Ottawa. Eventually shifted west to Stittsville and Kanata in ‘94 and finally made it out to Constance Bay in 2000.

“I love it here,” he said. “The changes over the last 19 years have been phenomenal.”

But the challenges of flood preparation are taking their toll.

“At my age I can’t do the sandbag thing anymore,” Paul said.

He says he’s already working on getting quotes to have his house lifted.

“I’m worried for my foundation,” Paul said. “I’m already getting prices on getting it lifted. We can’t go through this every spring. But lifting isn’t the end-all. If the water goes over your septic and you lose your power. Let’s hope the worst is over.”

Donna Pritlove is another resident who is still holding on with three feet of water in her crawl space. She just came in to chat with some of the volunteers and see how everyone is holding up. She throws some money in the flood-relief donation jar before heading out to volunteer.

“The Legion has been great to us,” Coun. Eli El-Chantiry said. “They’ve been serving everybody who comes in. It’s a comfortable spot.”

He said there was no change in water levels except in Armitage where it was up a couple of inches.

“I don’t want to be too optimistic, but I think this is the end of the peak,” he said.

If it is the peak, it is 14 centimetres below what was anticipated.

Coun. El-Chantiry is still focusing on the current conditions, but says it is hard not to look down the road as well.

“The biggest question is about to rise,” El-Chantiry said. “Everywhere I go, people are asking me am I going to add my voice to the climate emergency crowd? I know the planet has changed. Is it man made? This is the question. And it doesn’t seem too many people trust the answer they are given.”

One thing everyone affected by the flood agrees on is “the 100-year-flood? That’s out the window.”

“Someone has some questions to answer and it’s not going to be coming from city council,” El-Chantiry said. “It’s got to be someone from the Ottawa River Regulation Planning Board. Even Premier (Doug) Ford wanted to know if this is going to be a regular thing.”

El-Chantiry said he too has heard the talk of the dams holding back too much water.

“I don’t know, but you hear it all over,” El-Chantiry said. “Who can confirm or deny that? Even locals who weren’t affected in 2017 are badly affected this year.”

El-Chantiry says it’s too early to crunch numbers on the flood fallout.

“How many are affected and how many registered with the Red Cross are two different things,” he said.

Desipte the larger flood he doesn’t expect more damage than that in 2017.

“We were prepared,” El-Chantiry said. “We heard about the flood coming and had a bit of time to prepare. I think we did okay, but we don’t know the level of damage yet.” 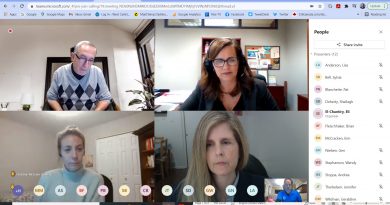 Ward 5 budget meeting about the roads