WEST CARLETON – The event may have been virtual, but the success was real.

On Sunday (Sept. 20), West Carleton was one of thousands of virtual Terry Fox Runs held across the country in an effort to continue to raise funds for cancer research despite most fundraisers for anything being cancelled this year due to COVID-19.

For Linda Cassidy, this year’s Terry Fox Run had a ton of extra meaning. Cassidy co-founded the West Carleton event with her husband Robert Dupuis who passed away earlier this summer, was walking in her late-husband’s honour.

“I am participating this year in memory of my husband Robert Dupuis, April 1936 – July 2020,” Cassidy said. “When Robert and I organized the first run in 2011, our goal was to keep the Marathon of Hope going for 10 years, which would have brought us to the 40th Anniversary of the Terry Fox Run, 2020. He put his heart and soul into making this the success it was.”

“Every year participants fill out our survey and the Forest Route, hands down, is the favourite route,” Cassidy told West Carleton Online last week.

West Carleton Online made a request to Cassidy to photograph her walk, but the media-shy volunteer politely declined.

In the previous nine years, the West Carleton event has raised $65,600 for cancer research.

Cassidy sent along two smiley face emojis to express her happiness in the outcome of yesterday’s virtual event.

One thought on “WC Terry Fox Run a real success” 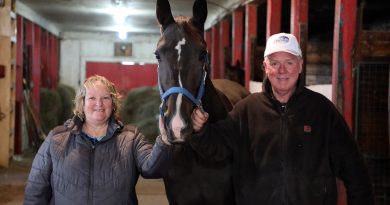