CONSTANCE BAY – It was a different event from the past, but organizers of the Ninth Annual Dravet Syndrome National Walk held last Saturday (Sept. 12) still expect to raise close to $50,000 for research when all the funds eventually trickle in.

“The community support out here is unbelievable,” Mandy McKnight, who organizes the national event with her family, told West Carleton Online from her Constance Bay backyard. “I’m blown away from people’s generosity. Our online auction has been amazing. There’s a bid of $70 for homemade dinner rolls. Who pays $70 for dinner rolls?”

This year’s event was held online across the country. There were 230 registered as of Saturday morning and small events are being held in Newfoundland, Prince Edward Island, Nova Scotia, New Brunswick, Quebec, about 13 different events in Ontario and even one in Alberta. In the past, the McKnights host the event in a carnival-like atmosphere at the Constance and Buckham’s Bay Community Centre (The NorthWind Fibre Wireless Centre).

They usually try to get all the teams together for a social and networking event as well as a fundraiser. This year, teams held their own events in their own communities and Liam’s Army, as the McKnight team is known, held a scaled down event in their Constance Bay backyard. Their backyard is connected to the Torbolton Forest, so the group were able to go on a three-kilometre walk along a beautiful, wooded trail.

“We contemplated not doing a walk, but I wanted to do something,” Mandy said. “Once Ontario entered Stage Three, we thought we could do something. We were thinking this year, maybe we will try for $20,000. A lot of my friends and people in the community were impacted by COVID-19. But once we got started, it just snowballed.”

“The online auction is doing amazing,” Dave said. “I think that is the way to do it. We doubled our auction fundraising, I think.”

Organizing a fundraiser during a pandemic is a challenge, but that auction is one of the successes.

“It’s been hard,” Mandy said. “It has it’s benefits. The auction, being online, has a much farther reach. It was still hard. We relied more on community donations without asking. We don’t know how people or businesses are doing with the pandemic. But individual donations have been amazing.”

Each year for the last four Liam McKnight, who is stricken with dravet syndrome, paints a painting for the auction. This year’s submission is a beach scene with the word ‘breathe’ on the top. At the time West Carleton Online spoke with the McKnights, the top bid was at $900.

“It’s a beautiful painting,” Mandy said. “I’m blown away by people’s generosity. It always does well, but nothing like this.”

Dave says Liam, 12, has been doing well managing the syndrome, but this is a challenging time of year.

“Every seasonal change he goes through a rough time,” he said.

Dave says the family has tried all the medications currently available which are designed to limit the intensity and duration of Liam’s seizures.

“We’ve tried all the medications and there is a honeymoon period, but that goes downhill pretty quickly after that,” he said.

Liam has had success with cannabis oil which Dave says has improved things “dramatically.”

Liam’s seizures have gone from a duration of five minutes to roughly 10 seconds. Liam has been dealing with seizures since he was nine months old. Dave says currently there is a family doing testing with a new medication, but at this stage, the process is quite secretive, and they don’t have too much information.

“We’re hopeful for that right now,” he said. “It’s promising.”

Meanwhile, Liam like many in West Carleton, is back at school for the start of the year at St. Michael’s Catholic School in Fitzroy Harbour.

“He’s so happy,” Dave said. “On day one when he came back, he was so excited. He really loves school so much and the school and students are so good to him. It was a long March Break.”

When the money does come in, there is an organization that will match the funds meaning the McKnights are expecting to turn the event in to “$80,000 to $100,000 for research from our little walk in Constance Bay.”

In the eight previous years, the walk has raised more than $420,000 for research. 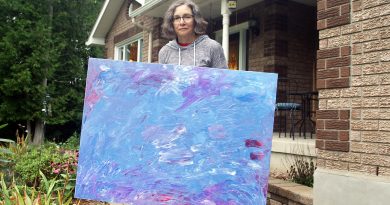