CARP – The Carp Fair is returning to its traditional spot in September this fall after a one-year, COVID-forced hiatus in 2020.

News West Carleton, the Ottawa Valley, the city, and beyond have been patiently waiting to hear since June 16, 2020, the day the 2020 Carp Fair was cancelled due to the COVID-19 pandemic which was just picking up steam in the country two months after the initial Canadian case was discovered.

It was the first time the fair had been cancelled in more than 150 years in its 158-year history, when The Great Fire struck the Carp Ridge Aug. 17, 1870.

But all that is ancient history now as West Carleton’s fall cornerstone returns and the Carp Fair ticker is counting down from 56 days and moving fast.

We are thrilled to announce that we have been busy putting together a plan to be able to welcome you back in September, stay tuned 🎡🎠🍭 pic.twitter.com/ol2sAyskjj

On July 10, the Carp Fair hinted they were putting something together. And now its official as Carp Fair 2021 President of Agriculture Neil Falls shared the exciting news with West Carleton Online after calling his last bingo game of the night at the Carp Fairgrounds yesterday (July 28) evening.

“It’s a great relief,” he said. “All the volunteers and the board want to get back to it and host people on the grounds again and we’re looking forward to it.”

As we mentioned that ticker is moving fast and due to the ever-changing regulations surrounding COVID-19, those volunteers have a lot of work left to do, and not a lot of time to do it in.

“Normally the planning would be done by now,” Falls said. “At this point, it would be just flicking a switch by now. It’s going to be a busy six weeks, but it’s nothing we haven’t done before.”

Earlier this week, the CAS put out a call for vendors, and Falls says the 2021 Carp Fair Prize Book for what will be the 157th edition of the Carp Fair will be almost identical to the 2019 edition, but there are still limitations.

“It will be scaled-back,” Falls said. “We have to follow Ottawa Public Health (OPH) regulations. There are crowd levels, distance and spacing for exhibitors and vendors and we do have a finite amount of space.”

For example, at last night’s (July 29) drive-in bingo, the show ring has held as many as 700 vehicles, but due to physical distancing numbers, that amount was reduced to around 200.

Falls says the CAS is planning for its traditional agriculture show, a reduced midway, concessions and agricultural awareness throughout the grounds.

“We wanted to make sure we could accommodate all the agricultural classes,” Falls said.

There will be some indoor activities but don’t expect headline musical acts in the W. Erskine Johnston Arena, at least at this point. For now, organizers will focus on local music.

Falls says the organizing committees are staying fluid do to the rapid changing pandemic regulations imposed by both the province and the city. Right now, the CAS is expecting restrictions on numbers.

“Today there is,” Falls said. “We don’t know what it will be like six weeks from now. We can use the show barn. We’re going to hold indoor events based on what OPH allows.”

Falls said, despite the challenges, when the opportunity to host a fair appeared, the CAS jumped on it.

“The following week stage three started (July 16) we held a meeting and talked about what we thought we could do and we felt we could put something on,” Falls said.

The CAS is meeting tonight (July 29) as the society continues to plan for a Carp Fair Sept. 24 weekend.

2 thoughts on “The Carp Fair returns” 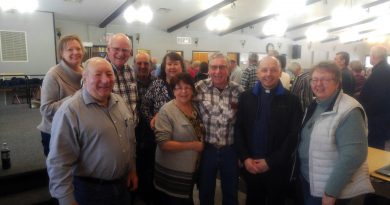 CHA gets new board members at AGM