BEACHBURG – The 164th Beachburg Fair has become the unofficial kick-off to the 2021 Ottawa Valley fair season in the, hopefully, post-COVID-19 era.

While the pandemic forced the closure of the Beachburg Fair and all other Ottawa Valley fairs in 2020, some of the Valley’s popular fairs (including The Carp Fair) are making their return but, like Beachburg, in a somewhat different way.

The Beachburg Fair, held July 23 to July 24, was definitely a different version of it, said Dave Mackay, president of the Beachburg Agricultural Society.

“It was very good during these times of COVID,” he said. “We were forced to do things differently because of all the regulations.”

This was the second time a pandemic caused the closure, with the other cancellation being in 1919 due to the Spanish Flu outbreak, he said.

The highlight of Friday (July 23) night was the horse pull, Mackay said.

Saturday’s highlights included the antique car and tractor show, beef show and bouncy castles for the children to play in, he said. There was also a clown to entertain the children.

Mackay said watching the children play, he felt they weren’t as overwhelmed as they can be when there’s usually so much to do.

There was also opportunity to take a sledgehammer to a 1974 Cadillac Coup de Ville, nicknamed the COVID Car, Mackay said.

“We made a few dollars on that,” he said. “It gave people the chance to beat up on the car.”

The exhibit hall was open, although there weren’t as many entries as previous years and the Bavarian Garden was open throughout the weekend.

Board director Angie Robinson said while there were no 4H animal clubs this year in the area, the West Carleton club agreed to provide a learning opportunity on sheep – prepping for show, which included weighing, washing, and clipping.

There was also a sheep show in the afternoon, she said.

To end the fair, the well-known, delicious, barbecued chicken dinner was served, with just less than 500 meals going out of the kitchen.

Mackay said all the volunteers worked hard the past year, and really only had two weeks to finalize the fair events, since that’s when they knew for sure it could happen.

Three volunteers did outstanding work, he said – Brenna Jansen operated the dining hall for the first time and “did a fabulous job” and Kirk and Angela Keller “went above and beyond” in organizing the car and tractor show and selling most of the ATV tickets.

Keith and Karen Riley of Kinburn won a Kubota ATV that was raffled.

“We think we broke even,” he said, as people donated to enter, as well as purchased food and sponsored the various fundraisers, such as the COVID Car.

“Hopefully next year we can have a real fair again,” Mackay said.

It’s also hopeful the agricultural society office will be renovated before next year’s fair, he added.

“We are thankful to those who came out and helped support this year’s fair,” Mackay said. 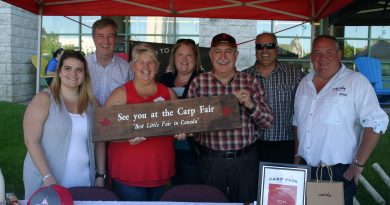