KANATA – Kanata-Carleton is back in blue after electing first-time politician Progressive Conservative Dr. Merrilee Fullerton to represent the riding at Provincial Legislature.
Thanks to new voting technology, the 42nd Ontario general election was over quick, and when the dust settled, the province had turned overwhelmingly blue. Premiere-elect Doug Ford and the Progressive Conservatives earned a majority after five years of Liberal government led by Katherine Wynn.
Kanata-Carleton is a new riding for the province after boundary changes removed a portion of Lanark County, but traditionally, it has been a Progressive Conservative stronghold for decades. For the last eight years West Carleton resident Jack MacLaren was the riding’s provincial representative. Seven of those years he was a PC MPP, and in 2017 sat as a member of the Trillium Party of Ontario.
MacLaren said he left the Progressive Conservative party while then-leader Patrick Brown said the party kicked him out.

In the end, the riding overwhelmingly chose Fullerton and the Progressive Conservatives. Fullerton received 23,089 votes; the NDP and John Hansen came second with 15,161 votes; the Liberals and Stephanie Maghnam came third with 9,110 votes; and Green Party candidate Andrew West received 2,827 votes and MacLaren received 1,898 votes. The riding had another high voter turnout with 52,993 votes cast out of 83,844 eligible voters.

“I’m energized, I’m energized,” she told West Carleton Online. “I think all of this is very positive. I’m looking forward to speaking with team members tomorrow and getting things going.”
Asked what West Carleton residents can expect from their new representative, Fullerton promised hard work.

“We’re going to work really hard with community groups, organizations like the Ontario Federation of Agriculture, the West Ottawa Board of Trade and we’re going to make sure the concerns of our businesses and farmers are heard.”

Fullerton said she shook MacLaren’s hand before arriving at her post-election party, but did not speak with him. Fullerton says, after two years of campaigning, she felt confident going to the polls.
“When your knocking on doors for two years, you can sense things changing in the community, trends, because your talking to people every day,” she said.
During the campaign, the Ontario Liberal Party accused Fullerton of making Islamophobic comments in the form of a tweet. Fullerton said, now isn’t the time to talk about that.
“Maybe one day, but this is a time for celebration, a time to make sure everyone gets the recognition they deserve for their support and contributions,” she said. “Today we have our results.”

Overall, Hansen was proud of the NDP’s second place finish in the election, but wanted more.
“Personally, we met our goal,” he said. “We thought we could finish second. We knew it was possible. We met our goal and we grew the party, but we didn’t win.”
Hansen says a Ford government is bad for the province and bad for the riding.
“I feel sorry for the people of Ontario,” the three-time candidate and Kanata-based engineer said from his supporters’ event held at the Royal Oak on March Road. “They’ve been outright deceitful in the way they’ve been doing things. They peddled a message of fear and anger.”
Hansen says the Conservatives are the wrong party for the riding known as the high-tech hub of Canada.

“(The result) certainly isn’t going to mean a champion for high technology,” Hansen said. “They are not a champion of this area’s primary wage earners. They don’t have a clue.”
Specifically, Hansen worries about the state of healthcare under the new regime.
“The PCs kept changing the game,” he said. “Their flyers said they supported universal healthcare, and now they say they are for two-tier healthcare. Overall, our healthcare, per capita, will go up.”
Hansen said he felt the NDP momentum growing just prior to Election Day and that worried the Liberals.

“The Liberals wanted a PC victory,” he said. “They were afraid of the NDP. If the PCs won, the Liberals felt they would be back in four years. It would be at least eight years if the NDP won.”
Hansen says he enjoyed the ride and has earned his rest.
I’m going to cut the grass at the cottage,” Hansen said of his plans moving forward. “I’ve got some urgent family business I’ve neglected. It’s been a great ride, a great rush and I really enjoyed it. It was fun.”

Liberal candidate and West Carleton resident Stephanie Maghnam did not return a text in time for this article. Trillium party candidate Jack MacLaren said he would contact West Carleton Online at a later date. 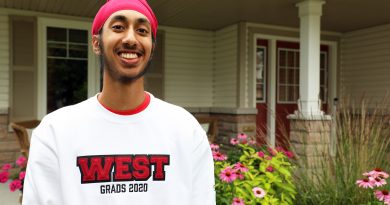