CARP – A surprise to exactly no one, Carp’s oldest business has its roots in the agriculture industry. Carp’s Ottawa Valley Grain Products (OVGP) is a mill in the middle of Carp and dates all the way back to 1827.

While the business is old, the owner is not. Stewart is a retired Canadian Armed Forces captain who purchased the business roughly four years ago from his wife’s parents.

It’s been a learning experience for Stewart, but lucky for him, a lot of that education is in the family.

OVGP was founded by Nat Lindsay in 1929 when he purchased a small flour mill in Renfrew. Within a few years, Lindsay turned to registered seed sales, split pea processing and feed manufacturing in response to the changing demands of local farmers.

It wasn’t long before OVGP acquired a large flour mill from Renfrew Industries, which was then converted to processing pot barley and seed grain. In 1942, OVGP acquired another mill in Shawville, followed by an outlet in Beachburg, in 1945. As part of the company’s expansion in the 1960s and 1970s, OVGP acquired a feed mill in Cobden, as well as the current-day mill location in Carp, which was originally the site of a flour mill that dates back all the way to 1827.

The production facility uses classic milling techniques, stones and screens, to mill and grind its products.

“My millwright, when I first started here, told me gravity never takes a day off, never breaks,” Stewart told the group. “Everything in this business is expensive. If something breaks, I usually estimate that it’s going to cost me $5,000. It’s an old way of doing things for sure. The millers who are here have been here for a very long time.”

The stone and screen mills OVGP uses date back, in some cases, all the way to the 1970s.

“That’s why I can’t buy parts for it anymore,” Stewart said.

Stewart also showed off the flour mill, something the OVGP has been doing since 2011.

“A lot of what we learned was through hard knocks,” he said. “It’s not typical flour. It’s soft white for pastry. We tried to make a flour for hard bread. But ours cost twice what Costco’s did. We thought it was competitive, but it wasn’t.”

“It’s a really great turnout,” she told West Carleton Online. “You never know. I remember our mother used to send us over here to get a big bag of bran.”

Stewart also spoke to West Carleton Online after the tour. He says community outreach is an important part of the local business.

“We’re investing in our community,” the Carp resident said. “We are doing farmer outreach. We’re very confident in our markets now and where they are going to be in the future. We all need food – the industry isn’t going anywhere. We’re taking the business to a really good spot I feel. Things like today are really good outreach opportunities.”

Stewart has also led school tours at the facility and acknowledges the mill is an important part of Carp’s history. But he’s keeping his eye on the future and that includes the flour business and Stewart also calls the emerging brewery market an “opportunity.”

Stewart enjoys the opportunity to show off OVGP and is regularly trying to track down information, and even items, that highlight the history of the Carp mill.

“They were very interested, and I can talk all day long about the mill,” he said. “I think it’s neat that a place like this exists in the city. That’s what drew me. When my wife said her father was getting out of the business, I was drawn right in.”

Stewart says having the historical society here also provides him with a learning opportunity.

“They are a good, friendly audience that wanted to be here,” he said. “I don’t have all the history. Some of it is probably with that group.”

Stewart bought the business and moved to Carp at roughly the same time. He thought a mill in the downtown part of Carp, an area that has been rapidly changing in to a place for tourism and visitors with its growing collection of restaurants, coffee shops and store fronts, might be at odds with his production facility. He was pleased when he learned OVGP fit in well with what the City of Ottawa projected as the plan for Carp.

“One thing that makes Carp, Carp is farming and agriculture,” Stewart said. “If that is what Carp is about, we fit here very well.” 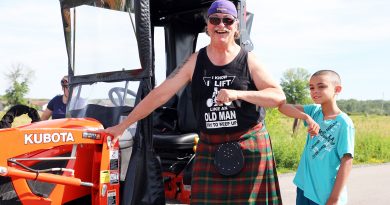 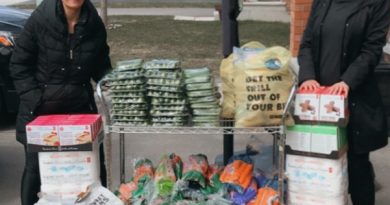 Need something? A new Arnprior company will ‘go gedder’