On Jan. 5, the West Carleton Review closed its door ending more than 40 years of weekly newspaper delivery in West Carleton. Over that period, three different community newspapers served the community, and at one brief time, all three operated at once.

Late in 2017, Metroland Media – the Toronto-based owner of the West Carleton Review announced it traded several of its Ottawa-area products to Post Media, which immediately announced it was closing all of the newspapers it received in the deal.

It was the end of an era for community newspapers in West Carleton.

“It struck me, and many others, we have a real lack of communications without that paper,” Walter Veenstra told the 30 people in attendance at Roly Armitage Hall. “Sometimes you don’t know what you have until it’s gone. Almost everybody in West Carleton recognized immediately we have a problem.”

Veenstra took the reins when the paper closed and formed a group of like-minded individuals and organized a few community meetings to address the issue.

The first community meeting was Feb. 12 where ideas were collected and questions were asked. From this meeting a core group of individuals including Ken Holmes, current council candidate Judi Varga-Toth and Andy Rapoch. West Carleton Online’s Jake Davies also attended several of the community meetings and smaller committee meetings.

“But we also need that news we used to get,” he said. “We want print. We like print. But we realize the world has drastically changed. The ultimate hope was we would have a newspaper. We want it free – we were used to having it free. We’re here to look at these ideas.”

Veenstra said the group had “been proceeding on three tracks,” including a coming events product, an online paper and a print paper.

Raphoch spoke of an earlier initiative to create a paper events calendar that would be delivered to West Carleton homes. It was intended to be published monthly and powered by advertising. Unfortunately, the project stalled and was abandoned.
“It was a bigger project than the owner originally anticipated,” Rapoch said.

“It serves a community similar to us,” Varga-Toth said. “Very rural, but close to the city.”

The Low Down began operation in 1973.

“Not only is it still around,” Varga-Toth said. “But the owners say things are picking up.”

Paid subscription is around 3,000 and the paper employs a staff of 10 with five full time employees.

“The problem with free, weekly newspapers,” Veenstra added. “Is you need $1 million to cover operating expenses over the course of a year. That’s a lot of ad revenue to generate in West Carleton.”

Holmes, a champion for improved and affordable Internet service in West Carleton, spoke about a new technology that is intended to simplify Internet navigation for seniors intimidated by online navigation.

Following a video detailing the assistive software, Davies, the publisher of West Carleton Online, was able to pitch attendees on his news service business westcarletononline.com.

This was the third meeting Veenstra and his group hosted with no current plans to host another.

One thought on “Focused on community communication” 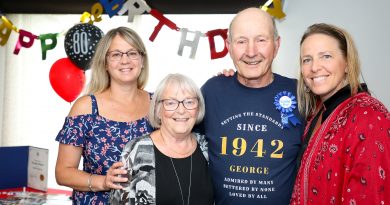