WEST CARLETON – When the West Carleton Review shut its doors on Jan. 5, the newspaper wasn’t the only thing that went silent.

West Carleton lost their community voice. For more than 40 years there had been a newspaper serving the West Carleton community. In fact, during that period, at times there were three newspapers. They were a way to keep a community informed on upcoming events, news and community issues.

The closure of the newspaper created such a stir that a community group formed looking at options to bring back a newspaper (see full story here). The group ended up with a mailing list of more than 300 concerned residents.

But newspapers aren’t the only mass communication tool residents in West Carleton have been using. An engaged community such as West Carleton, which regularly has the highest voter turnout in the City of Ottawa, has a lot of community leaders looking to get the word out. The advent of social media has certainly helped and West Carleton Online talked to four community members who regularly deal with the challenge of getting their message delivered.

Corkery is one of the most rural communities in West Carleton. It has no storefront businesses or village hub. The community association building is beside the Corkery Fire Hall on Old Almonte Road with few neighbours.

They recently kicked off a project to raise funds to put a roof over their outdoor ice pad.

Katherine Woodward says in the four years she has been with the Corkery Community Association, “communications has always been our biggest challenge,” she said. “We find it so difficult to get in touch with the West Carleton business community.”

Technology has helped a bit.

“Social media has really helped,” said Woodward who has been the association president for the last two years. “I find, once the community knows about an event or project, they participate and are very active. It’s definitely a growing community.”

Woodward has also created another unique method of reaching her community. She has recruited community poster ambassadors. At the beginning of each calendar year, she distributes 12 posters to each ambassador. The ambassador is responsible for posting the posters each month on Corkery’s community mailboxes in the ambassador’s area.

Carp’s Tara Azulay moved back in 2010 after 15 years in Toronto. She grew up in Dunrobin and spent a lot of time in Carp with her grandparents.

She said she was ready to come home.

Azulay, who volunteers as director of Carp Health Access, does admit, “Carp has really changed the last few years.”

Azulay has used Facebook to mass communicate, but also to build community.

She felt Carp need something similar and created the Facebook page Carp Community Collective. In a year-and-a-half it has grown to 319 followers.

“In my mind we needed something like that for the village,” Azulay said. “It’s really grown organically. Six months ago we would get one follower a week and now we get about five requests a week.”

Azulay says she monitors it regularly and approves all posted material. It is used to promote local events, provide late-breaking news and promote local business (kind of like us). It is a home for local conversation such as the new location of the electronic traffic calming, speed display system.

“I want it to stay clean and positive,” Azulay said. “Not turn in to a gossip or buy and sell page. It’s been a good channel for Carp Health Access. It serves multiple purposes. Some people use it as a newsfeed, others use it to have conversations.”

Azulay knows the risks association with moderating a Facebook page.

“I’d like it to become a place for conversation, but there is a risk to it,” she said. “There’s so much noise out there and much of it is bad news. I’d like this to be a nice place to visit.”

Jobs in West Carleton is a page for those on the hunt for work with little commute. It is an aggregate of opportunities within West Carleton. It has more than 500 followers and Spallin started the page when she was out of work.

“I started the page in 2016 when I was out of work,” she told West Carleton Online in a Facebook messenger interview, June 24. “But I had really been on the job search on and off since 2013. I went through the EI self-employment program and then through both Ontrac and the ITO 2.0 on Moodie drive. I grew pretty frustrated with both of those programs because I knew how to look for a job, network, write a resume, cover letter etc. I didn’t find they were helpful enough.”

She said Ontrac was more geared to skilled trades people and the ITO 2.0 catered to downtown jobs.

Spallin hoped to turn job searching in to a job. She created a three-part video instruction on maximizing the social network LinkedIn as a job finding tool. She contacted Coun. Eli El-Chantiry about the possibility of mobile job training clinics in the ward.

That didn’t work out for Spallin, but the Facebook page is still active and still shares job opportunities with the West Carleton community.

“Having been in tech for many years, layoffs were common,” she said. “Both my husband and I have endured countless cuts.”

She says her page isn’t as socially active as other Facebook pages in the community.

“I haven’t received a lot of feedback from actual visitors but can use the analytics to see how many views each post gets,” she said. “One post I did, it might have been a one-year anniversary post, and there were people who thanked me for running the page. In the past six months I’ve had more businesses ask me to post their jobs.”

Spallin, who is currently working, says she is still looking for new opportunities and wants to keep helping others find local jobs as well.

“I’m still working for my dream job. It’s a challenge here because we don’t have bus service for those who don’t drive, such as teenagers,” she said. “Plus, we do have some great businesses in the ward. What would be great would be to have an annual job fair at the high school. My daughter as well as her friends and classmates have a tough time getting part time jobs out here.”

Woodlawn’s Ken Holmes, a retired senior military engineer, has been a champion for Internet access in the ward for many years. He is also aware of the challenges seniors in the community are facing as they attempt to adapt to new online technologies.

During a community meeting at the West Carleton Community Client Centre July 9, Holmes presented a video on software designed to make computer and website navigation easier and less intimidating for seniors new to computing.

“It reduces the complexity of modern operating systems to a simple set of touch/click icons,” Holmes said.

Last December, Holmes submitted a paper to The Council on Aging of Ottawa titled It Is a Failure that Most Seniors are not Using a Computer…We Have the Ability to Change That. In it, Holmes states two-thirds of seniors have never used a computer and are not online. It also lists the many health and other related benefits access to the Internet could have on rural seniors.

He also has his own website called the Older Adults Rural Support Hub.

“It is a bit of a testbed that I am developing slowly and modifying based on feedback,” Holmes said.

He started it in September, 2017 and has drawn 1,625 visitors to the site “with little advertising.”

“The site is part of a bigger picture project to get the public library to embrace the technology of Computer Interface Applications.” 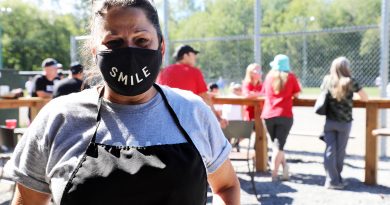