CARP – It’s been a lesson in social media, media influencers and mass communications for the parents of the West Carleton Warriors.

It doesn’t matter if it’s a political election, a music competition, or the Chevy Good Deeds Cup, getting the word out is the key to victory.

While the Warriors peewee team was winning the hearts of their community with their many good deeds, their parents have been tasked with winning the minds of voters across the country.

They’ve managed media requests, launched huge, all-consuming social media campaigns, transported the Warriors to and from interviews and public appearance and still manage to get their boys to their 6 a.m. practices, early evening road games and weekend tournaments. The team tied their first playoff game last night (Feb. 21) in Pakenham 1-1.

Warrior parents Kim Wood and Shelley Welsh sat down for a coffee break with West Carleton Online last Wednesday (Feb. 20) at Alice’s Village Café in Carp to talk about the trip. Wood’s son Zack Hall and Welsh’s son Blake Voelker play and volunteer for the Warriors.

Both parents were with their kids, on the midway, at the Carp Fair when the tornado struck Sept. 21. When the fair was closed for safety precautions, they were seeking cover in the Huntley Curling Club.

“The fair was amazing, they were so organized,” Wood said. “We’re all going to remember where we were at the time of the tornado. We hope this will be something to change that.”

The next day, the Warriors were back at the fair, collecting funds and raising $4,100 for disaster relief. Months later they were still helping, volunteering their time at a Christmas dinner for those displaced by the tornado.

And now, after raising more than $9,100 for West Carleton Disaster Relief already, the players still have a chance to raise $100,000 more.

“This is kind of the home stretch,” Wood said.

But the media blitz continues. As part of the contest rules, the panel that will select the winning Good Deeds team will rely heavily on social media impact during the final round of the competition which ends March 2.

Welsh and Wood share details of the work, of not just booking traditional media interviews with the local TV networks, radio stations and city newspapers, but identifying the players in the local social media game – the media influencers as they are known.

Over on Twitter, the Warrior parents are slamming it. Getting those all-important hash tags out there and encouraging others to share their stories about the aftermath of the tornado and the positive effect the Warriors have had on the community.

“With the boys doing this, were trying to bring the community back together.” Welsh said. “We’re all struggling with insurance and other issues and wondering what’s going to happen when the snow melts. This is not the end. This will inspire more kids to do more.”

The two parents, proud as peacocks, take turns fighting back tears when talking about their kids’ achievements.

This isn’t the first time these kids have helped out in times of need. Many of the Warrior players were hard at it in 2017 as well, when a historic flood nearly sank Constance Bay and many other West Carleton communities (and beyond) along the Ottawa River. Many of the kids, and parents were out there in the spring cold and record-breaking rain filling sand bags and helping out.

“They really want to keep helping,” Welsh said. “When the tornado struck, we saw all the emergency vehicles and all he hydro trucks. We wanted to help, but we weren’t allowed in. The kids we’re ready to go the very next day.”

And the media blitz has worked.

“Other kids at tournaments are coming up and asking, are you that team?” Wood said. “The hockey community has been so supportive. Off the ice anyway (she joked).”

“Did you happen to see some of the community love being sent our way through video submissions and messaging?” Welsh messaged West Carleton Online yesterday (Feb. 21). “Wow! We’ve been in tears all day. Our boys have really opened hearts and put smiles on so many faces.”

While voting is over, the Warriors hope you will continue to show the Chevy Good Deeds panel how important their story is. They ask you continue to share your stories on Facebook, Twitter and Instagram using the hashtags #GoodDeedsCup and #westcarletonwarriors as well as attaching the addresses @ChevyCanada, @Marner93, @IceSingHNIC and @couellette13.

There is also a Twitter poll posted by Chevy Canada here and a French version of the same poll here. 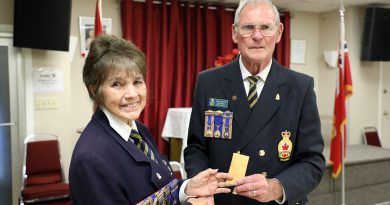