The pair have a storied history in West Carleton, both long-time community leaders.

George spent his entire life in West Carleton and was a farmer, a developer, and a jack of all trades. He was also a fan of writing.

One of his most important stories was a 40-page memoir filled with stories and photos of his life title My Memories of a Life Lived Across the Creek that he dedicated to his grandchildren.

“I wrote a story for my grandkids because they didn’t know what it was like growing up here,” Kennedy told West Carleton Online at his 91st birthday party in 2020. “I used to know everyone in Fitzroy Harbour. I knew the names of their horses, their dogs.”

George published the memoir in 2009. He also wrote a couple of very popular columns for West Carleton Online. In 2020, George told us the story of the Dunrobin Bridge and the sign erected in honour of it in 1908. Later that same year George shared the history of the Younghusband General Store with us.

But writing wasn’t his only contribution to the community.

George was the 1960 Carp Fair President of Agriculture. He also served as a school board trustee in the 1970s; on the Torbolton Township Council in the 1980s; as Dunrobin Community Association president; as Torbolton Historical Society president; and Master of Carleton Lodge of the Shriner’s Club.

Ruth is as much a community leader as her husband. Ruth was the 1974 Carp Fair President of Homecraft and to this day is an active member of the Dunrobin and District Women’s Institute (WI). Wilson still fundraises for the WI, sharing fresh strawberry shortcake at the Dunrobin Community Association’s Canada Day celebration earlier this month (July 1) – the first Canada Day event since 2018.

Last fall, Ruth was one of the key knitters supporting the Renfrew Royal Canadian Legion, Branch 148, celebration of the Remembrance Poppy. In 2018, Ruth led the WI’s adoption of two sections of road along Dunrobin Road as part of the national Adopt-A-Road program and each year the WI head out to clean up the ditches of the roadway.

The couple will keep this year’s celebration low-key, but Ruth, a long-time West Carleton Online subscriber, asked the publisher if we would publish an announcement of their incredible milestone. 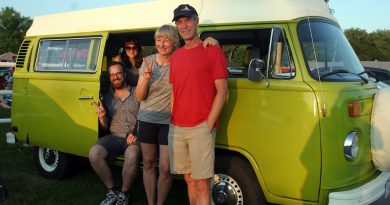