The following historical submission was written by George Kennedy for West Carleton Online.

DUNROBIN – There is quite a story that goes with the Dunrobin Bridge sign erected on the corner of the property where Younghusband’s Store used to be.

As I look around, I don’t see anyone that knows more about its history than I do, so l’ll do my best to tell its story and the other things that happened on Constance Creek.

As I drive across the present bridge it makes me sad to see the way the beavers have flooded the creek with their dams and killed so many of the trees on each side. lt’s hard to realize J.R. Booth brought a few cribs of timber down it from Rafting Bay on lot 24 on the 4th Concession, back in the 1860s. Rafting Bay was on a bend in the creek that emptied into Constance Lake, at the south-west corner.

The gossip at the time thought Booth needed some of the white oak that was growing on the clay ground on both sides of what is now Dunrobin Road in order to bid on the first Parliament Buildings. As big squared white oak timber wouldn’t float when freshly cut, he had to have enough white pine or spruce timbers for the bottom layer of the crib in order to carry the oak when the flood waters came in the spring.

These cribs were usually 12 to 14 feet wide. There wasn’t a bridge over the creek on the Thomas A. Dolan Parkway, (at that time it would have been called the Town Line between March and Torbolton Townships), but there was a bridge of sorts at Vance’s Side Road. Lt wasn’t very much of a structure and Booth knew that his cribs wouldn’t fit under it. He asked the council to remove it and waited three days, but nothing happened, so he loaded it with dynamite and blew it in to the bush on both sides. The cribs were now on their way to his sawmills in Ottawa.

I can’t find any record of when the first bridge was built over Constance Creek on what is now the Thomas A. Dolan Parkway. I imagine the abutment on the northeast side was pretty crude but the one on the Dunrobin side was made of cement, likely from the sand pit just up the road where Dunrobin Lake is now. No one seemed to know what it is sitting on, but the same one is what is still there today.

I should mention here it was because the bridge was on a ‘town line’ and over such a large stream that it was built and paid for by the Carleton County council. That is the reason why the County Warden and members of the Road committee all got their names on the sign.

My grandfather and his family had moved to Lot 1 concession 6 (647 Thomas A. Dolan Pkwy.) Torbolton Twp. in 1902. They had lots of horses at that time, (as usual), so my father got hired with his horses as one of the teams on the pile driver when they built the bridge in 1908. l’m not sure what kind of a transmission and braking system they had on pile drivers powered by horses. My father said they were driving 30-foot piles – the first one they just set the hammer on it and it went down to water level. The next 30-foot pile, when coupled with the first one, usually took about five or six pucks. The next one took a good bit of hammering, until it hit rock. When all the piles were driven, a framework was built on top of them which was filled full of big boulders to form the abutment for the bridge.

l’m not sure how they assembled the steel bridge. Besides the building of the bridge, the county was responsible for the approaches for 100 feet on both sides.

A while after the bridge was completed, they asked my dad if he would bring a sign up from Ottawa to place on it. He was taking a light team on the express with a load of potatoes to the ByWard Market in Ottawa and was to bring home two bags of coal for his brother-in-law, who ran the blacksmith shop at Dunrobin. He thought the bridge sign would be some little thing he could carry under his arm, and was pretty cross to find the sign weighed a couple of hundred pounds, and the framework to bolt it to the railing of the bridge was another 200 pounds. His team was pretty tired after this 40-mile round trip.

Time went by, as it always does, and once again a new bridge was needed. This time Torbolton Township was in charge. Tenders were called and when they were opened, a nice young fellow from down near Avonmore had the lowest bid. Alfie Cyr, from Cyrville had been in the habit of getting the bridge work in the county, and our council of the day seemed to hold up proceedings and payments every chance they got, just because Cyr didn’t get the contract. I can’t remember the fellow’s name that got the contract. My cousin, Harold Kennedy, and I did a lot of work for him and were getting paid as soon as the township released a payment.

Everything went as planned until it came time to remove the false piles that had been driven to support the concrete-reinforced deck. The idea had been to have a frogman with some type of electric saw to cut them off, but for some reason, they couldn’t do it. It looked like the end of the line for the young contractor, as the township was holding back a lot of advance payments.

Both Harold and I were still on the hook for a good many 1,000 dollars. The reeve knew this and wanted us to submit our bills to the township. We turned down the offer and wondered if there might be some other way to cut off the piles.

By this time, the creek had frozen over with the piles sticking up through the ice. The contract called for them to be cut off three feet below the surface of the water. I had already had some experience with the use of dynamite under water, after blowing a track through the cattail roots so that Reggie and Harvey Boucher could get their trapping boats from the sand ridge to the creek. (This is also quite a story.) I knew Charlie Sweeney had a small wood auger that was just the size of a stick of dynamite, and I thought if we drilled down the middle of a pile, that a half stick of dynamite should cut it off. I talked to Harold about it, and we decided to go for it.

He welded an extension to Charlie’s auger, in order to get a hole three feet deep, and I went to Hull for a case of dynamite and a handful of electric caps. The numbers on the caps or detonators didn’t matter as we would only be shooting one at a time. We were a bit nervous the first time, but it was even better than we had hoped for. It not only disintegrated the wood where the dynamite was, but also popped the piece above the explosion up out of the hole.

We didn’t want to attract too much attention, especially when we had the hood up on the truck to power the electric caps. Harold wanted to do the shooting, and got to where he would have two or three ready to shoot without going down under the bridge. We had no trouble with the study we did on the effects the dynamite would have on the mud turtles, the mudpouts or the bloodsuckers. Now the contract was completed. The contractor got paid – Harold and I got paid, so you might think this is the end of the story – but there is more.

Again, time passed. We had almost forgotten about the Torbolton Bridge sign. Robin and Luella Armitage had gone on several bus tours sponsored by the Canadian Cattlemen’s Association. On one of their trips they met an old farmer and his wife from just outside Manotick. When he found that Robin’s last name was Armitage, he said as he worked one of the fields at the back of the regional garage and scrap yard, he could see part of a big iron sign with James Armitage and some other names on it. Robin and I went down to Manotick and, sure enough, it was the sign from Dunrobin Bridge.

I was president of the Torbolton Historical Society that year and I thought we should get it before it got sold for scrap. Roly Armitage was the mayor of West Carleton at that time, so we got a letter from him allowing us to go and get it. At that time. I had accumulated two sheds full of house and farm related antiques, at the edge of the bush across Greenland Road from where I was living. My grandkids called it ‘Grandpa’s Funny Farm.’ This seemed to be the best place for the bridge sign to be displayed. Later on, I tied it to the fence along Greenland Road where I had antique equipment on display. From there it went to Robin Kennedy’s for a Kennedy Reunion of sorts.

Once again, time passed. Younghusband’s Store had been removed in order to straighten Dunrobin Road and the lot taken over by the City of Ottawa. The Dunrobin Women’s Institute and the Dunrobin Community Association first planted a Christmas tree with ‘borrowed electricity’ for the lights and sang Christmas carols there on Christmas Eve. The same groups then approached Coun. Eli El-Chantiry, our member on the city council, to see if they could place a big stone with a plaque on it in memory of the Younghusband family, as well as two donated benches. I knew this was going on. I didn’t want to distract from their plan, but I went to Eli to get permission to erect the bridge sign at the corner of the lot, and two hitching posts about where they had been in the old days for customers to tie their horses to while shopping. He thought this was also possible.

If anyone is interested, and if they look on the sign at Dunrobin, they will see a little hole just above the last ‘o’ in ‘Corporation.’ Tommy Baskin told me this was made by joe Arkell with his rifle while standing on the railing of the bridge on the opposite side of the road. Joe and Bud Arkell were keen deer hunters and I suppose stopped at the bridge at the end of a chase.

I have tried to make this story as interesting and as close to the facts as possible. you may have noticed during the spring flood and when there is a strong east wind, that a big section of cattails the beavers have cut off, will float down and lodge at the bridge. This is because the false piles we blew the tops off of are still in underneath the bridge and restrict the flow of any big chunks. But if you don’t tell, I won’t tell, and we will let the new group of engineers come up with the cause and the cure.

It has been fun putting this story together. It seems to have been a bit rambling, but as I have just celebrated my 90th birthday, that may be the reason. Hope you found it interesting.

2 thoughts on “The story of the Dunrobin Bridge sign” 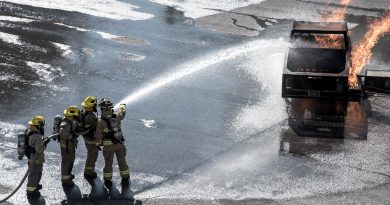