CONSTANCE BAY – Two 17-year-old West Carleton natives re-purposed a grant they received from Taking IT Global to share with community members making a positive difference in the face of a global pandemic.

Constance Bay’s Autumn Mcklusky and Woodlawn’s Emma Wilson wanted to recognize the people in their community doing both big and small things to make life better for their neighbours during these trying times.

“We wanted to show recognition to anyone in the community who is helping out,” Autumn told West Carleton Online last Thursday (July 2) from her and Emma’s place of work – The Lighthouse Restaurant in Constance Bay. “We already had the grant.”

The two West Carleton Secondary Students had received a grant from the United Nations Association in Canada for the Walk to Remember event – an annual event to honour babies that have died due to pregnancy loss and infant death.

The Taking IT Global grant was originally earmarked to be used for the two to create a storybook to read to young students in rural areas as part of a workshop. The pair received the $750 grant in February.

Autumn and Emma had already tested the project at St. Michael’s Fitzroy Harbour and was going to bring the workshop to other schools in West Carleton. Then the pandemic landed in Canada and all Ontario schools were closed.

Taking IT Global is an organization that actively engages youth to help shape a more inclusive, peaceful and sustainable world. They gave grant holders three options on what to do with the grant when it couldn’t be used for its original purpose.

“We just thought it would be better to give it to the community,” Emma said. “we chose to relate it to the pandemic.”

“During these trying times, we want to support our community in any way possible,” the two released in a statement to the community. “In particular, we want to thank our community’s hard workers. In addition, we would like to support local businesses who continue to serve our community. We plan on giving away gift cards from local restaurants to community members who have continuously shown their dedication to our community during the COVID-19 pandemic.”

The two divided the grant in to $20 gift cards to The Lighthouse Restaurant and began taking requests from the community on who was deserving of the recognition.

In Dunrobin they gave a card to someone helping seniors. The Baylicious Baykery of course earned one. The Constance Bay Community Market; a person who sewed and donated masks; a few doctors and firefighters; a person who found a television for another community member who was having difficulty with the boredom of being home. They found no shortage of worthy candidates and had distributed all the cards on short order.

“The pandemic is an awful thing, but to see the community come together is a beautiful thing,” Emma said. “It’s really nice to see.”

Autumn, of course, agrees with her partner.

“We already know West Carleton is a tightknit community,” she said. “It’s so nice to see everyone helping everyone and that’s been going on for years.” 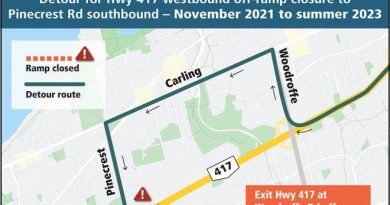