KINBURN – Not unexpected, but the Eastern Ontario Super (senior A) Hockey League (EOSHL) will not play its second season this winter.

Of course, this means the West Carleton Rivermen will also not be lacing up the skates in the 2020/2021 season.

“The EOSHL would like to thank all our fans for trying to stay patient this season,” Gagne released in a statement. “The EOSHL owners, staffs and players are very disappointed we could not step on the ice this season but look forward to having all you fans cheer all of us on even harder for the 2021-2022 season.”

The announcement is not much of a surprise in the era of COVID-19. Many professional leagues around the world cancelled their seasons this year or heavily modified seasons as has happened in minor league and youth hockey across the country (which are all currently suspended in Ontario under current lockdown rules.

“We tried,” Gagne said in a recent interview with the Cornwall Standard-Freeholder. Overcoming the obstacles presented by COVID-19 proved too much for the fledgling league.

“Some teams in our league don’t even have a rink open in their community this year,” Gagne said. “We were going to try and salvage something, but it just wasn’t realistic.”

Rivermen team owner, Galetta’s Adrian Moyes says the announcement is a bump in the road, not the end of the line.

“We are certainly disappointed not to get to take the ice for the 2020-2021 season,” Moyes told West Carleton Online today (Jan. 22). “However, we do understand that by staying home and social distancing, we will be able to get back on the ice sooner in front of our great fans. Once it is safe to do so, the Rivermen will be back and stronger than ever.”

There is good news coming out of the fledgling league as well. The president announced a new team joining the EOSHL.

“The disappointing news is followed up by some exciting news for our league,” Gagne said. “The EOSHL is expanding once again. The EOSHL would like to welcome the new franchise in Chesterville, ON. The Chesterville team will be in good hands with Robyn Sadler, Kent Young and Rob Raistrick owning the club.”

The new team will be known as the North Dundas Rockets – a name with deep roots in the area. The league has more than doubled in size since debuting with four teams in the inaugural 2019/2020 season. It was a very good, so close to great, season for the West Carleton Rivermen in year one. The team went wire-to-wire in the regular season winning the regular season championship. The team lost Game 5 in the championship playoff series against the Cornwall Prowlers.

Gagne says the league might not be done growing yet and says 10 teams would be the “perfect” number going in to the EOSHL’s second season, whenever that might be. Although the league isn’t just taking anybody that offers to pay the expansion fee. The league’s governors rejected one submission from a community in Quebec.

The league’s four flagship teams, West Carleton, Deseronto, Cornwall and Maxville (under new ownership) will be joined by teams in Alexandria, Smith Falls, Frotenac and Fort Coulonge. The Fort Coulonge Comets is the league’s first Quebec based team. 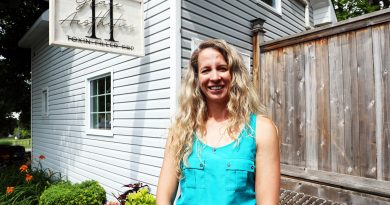