For West Carleton’s top fastball team, and the GOFL, 2021 was a return to play following a COVID-19 cancelled 2020. Most tournaments were also cancelled, including the Men’s U23 National Fastball Championship scheduled for Carp in the summer of both 2020 and 2021.

While the record book may not look fondly on the ‘Trics in 2021 who went 3-7 in the GOFL regular season finishing in the six-team basement and then bowed out of the double-knockout playoff tournament losing two straight. On Saturday, the Electric kicked off a soggy triple-header at the Carp Fairgrounds, losing 8-1 to the Kars Aces and eliminating the ‘Trics from the GOFL playoffs.

For Electric player-manager Adam Brown, it was great to get back to the sport he loves.

“Big thanks to Dale and Laurie Hanna from West Carleton Electric Ltd. for their sponsorship and support this year and over the years,” Brown told West Carleton Online yesterday (Oct. 5). “They are a great help. It was really good to be back on the diamond and see everyone, both the guys on the Electric and on the other teams. And even the umpires. I really missed it and I know others did too.”

There was even a bit of a COVID-bump in attendance and many of the games this season had small crowds of enthusiastic fastball fans.

“We had some decent crowds out to games, including a doubleheader in Micksburg in front of about 100 attendees,” Brown said. “The level of play in the league was very even. Some great games. The skill difference between first place and sixth place teams is not that large.”

Following the GOFL opener for the Electric last July, Brown remarked the Electric had added some local youth joining the team in some capacity for the upcoming season. Checking back in at the end of the season, Brown says those players became contributors.

“There are lots of new young guys playing in the league, including pitchers, in their teens and 20s,” Brown said. “It will help the future of the game. We added some youth to the ‘Trics and they did great. Owen Brown (my son, 19) and Jeff Campbell, 27, are both from Fitzroy and have played in the local Harbour Ball league and were ready to make the jump to GOFL, as well as young pitcher Cory Baldwin, 21, from Kemptville who played with Owen at the U19 level back in 2019.”

The Electric, based out of Fitzroy Harbour, have spent 17 years in the GOFL. While they have no championships to date, the team played in the finals three times in 2004, 2007 and 2017. The team often travels to tournaments throughout the season, but did not do so in 2021 due to COVID-19.

Newcomer Matt Greer had a huge impact on the team. Able to play multiple positions, and play them well, Greer led the league in home runs with five (tied with Kars Aces Brad Pender).

In the first Electric playoff game, Greer struck out 14 batters scattering four hits over the game and hit a two-run home run. Greer, a Shawville resident, hit another home run in the Electric’s second playoff game scoring the team’s only run in an 8-1 loss. Greer had all three RBIs for the ‘Trics’ playoff run.

“Matt was a huge addition to the team,” Brown said. “He’s plays at the ‘open’ level, very good athlete, all-around player and great guy. And of course, our returning veterans are the glue that holds things together. Guys like Neil Murphy, Trevor Barton, Steve Cavanagh, Chris Costello who have been around for the long haul with the ‘Trics. Really looking forward to the GOFL again in 2022.”

Brown, a man with his ear down to the fastball ground, also shared a scoop for next year, including the possible return of youth softball to West Carleton.

“There’s rumoured potential GOFL expansion, stay tuned,” Brown said. “And I hope to get the minor softball back going as well in West Carleton next spring.”

in other GOFL playoff news, the Micksburg Twins defeated the Orleans Rebels 9-0 in game two of the Saturday soggy triple-header. The Manotick Brewers would defeat the Carp-based Ottawa Valley A’s 7-2.

Tonight (Oct. 6) the Rebels take on the Brewers at Pierre Rocque Field in Orleans for the right to travel to Micksburg to take on the waiting Twins in the first game of a possible two-game finals. The winner of tonight’s game will have to win two straight to become champion.

Brown is also the creator and key contributor of the popular Eastern Ontario Fastball Blog covering all angles of the sport in the Ottawa Valley on both sides of the river, and you can read his reporting here. 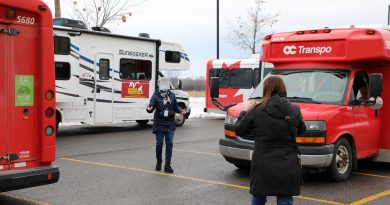