CARP – The city-wide volunteer advocacy group Rural Transportation Solutions (RTS) seeks an answer to a problem that has plagued rural residents for decades – how does the city meet the rural community’s public transportation needs without breaking the bank?

RTS formed roughly in 2019 when several advocates from around the city, especially in the rural areas, got together to combine their expertise and experience to focus on finding a solution to the problem of successfully providing reliable transportation for Ottawa’s rural residents.

“Normally we wouldn’t be working together on advocacy issues, but we just kept bumping in to each other at City Hall,” RTS member and Woodlawn resident Ken Holmes told West Carleton Online about the origins of RTS.

Holmes has long been an advocate on rural issues, specifically road conditions and Internet service, but will be broadening his scope on this project. In 2019, the Huntley Community Association (HCA) hosted a meeting looking in to public transit options for residents in rural west Ottawa. Not long after, the pandemic arrived, and the HCA put their transportation work on hold. But the RTS have picked up the baton and continue to move forward, but on a more broad mandate including all rural areas of Ottawa.

The RTS recently secured some grant money and has used it in part to start collecting data on the issue. Holmes says RTS, which members include community and youth association representatives, has lots of knowledge and experience on the issues rural residents face.

For seniors the consequences revolve around isolation. For youth, “they pretty much have to ask their parents if they need to get anywhere.”

“It’s a typical problem for a modern family out here,” Holmes said. “I remember the owners of Dunrobin Meat and Grocery used to drive to West Carleton Secondary School at the end of the school day to pick up their employees.”

The key work of RTS right now is collecting data from rural residents and about two weeks ago, RTS launched a survey on its website to collect information.

“We’ve had about 239 responses so far,” Holmes said. “A good split between adults and seniors. We need greater participation by our youth.”

The RTS is closely linked to the Carp Transportation Study which also created a survey in January and February of 2020 focusing on the Carp area. A lot of the data collected from that original survey shone the light on the issue the RTS is trying to tackle.

“Eighty-three per cent identified transportation as one of their biggest challenges,” Holmes said. “About half of the seniors polled said they would travel several times more per month if they had better access. Something like that could add a little bit more of a routine for seniors. Once a week they could take a bus to Carp to visit friends.”

RTS hopes to move forward from the Carp project.

“We’re trying to find out what the need is and where it is,” Holmes said. “You have to get a reasonable definition because it is a huge rural area.”

The current survey hosted by the RTS has already provided some interesting information.

“Since the pandemic started, about 50 per cent of respondents say their traffic patterns are not that different from before the pandemic,” Holmes said. “I find that surprising.”

One of the reasons West Carleton doesn’t have OC Transpo service is Ward 5 does not pay a public transportation levee as part of its municipal taxes. When the subject of public transportation comes up, city politicians are always quick to ask how much are you prepared to pay? The RTS will also ask that question.

“There are some options that exist in the rural areas, particularly in the east end,” Holmes said. “About half the people who have responded recognize there should be some public share and not have the users pay 100 per cent of the cost. At this stage, I believe it would be fair to say there is a split between those who believe the transportation solutions should be entirely user-pay and those who support some degree of public support. That’s good information to bring back to city council. I’m sure there are a number of people who want no transportation service out here as well.”

The RTS is not looking to influence input on the survey, but get an honest idea of what is needed and desired for rural residents.

“I think it’s very important people have a very open mind at this stage of the process,” Holmes said. “There are innovative solutions that work very effectively for unique situations.”

The RTS survey runs until May 23 “with the full understanding we can extend it depending on the circumstances,” Holmes said. 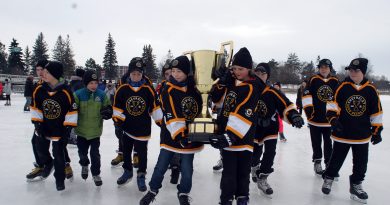