CARP – It was a night to try new food, enjoy a drink, chat with neighbours and honour and celebrate all the work that went in to the Ridge Rock.

The Ridge Rock Brewing Company held a Founders’ Night event last Tuesday (Aug. 27) to honour those who helped make the popular ‘watering hole’ a success. The event was invite only, made up of those early investors who carry the title founder, and their guests. Somehow, West Carleton Online managed to sneak in to the special event too. The place was full.

Guests had the opportunity to enjoy a Ridge Rock beer, try some new food being considered for the menu, listen to musician Brent Dickie and get to know one other.

Ridge Rock is the brainchild of four friends from the Carp and Dunrobin area. The downtown Carp brewery and restaurant will be celebrating it’s first anniversary at the end of September, a date they share with the historic Carp Fair.

It’s been a great first year and co-owner, Carp native and six-year NHL veteran Calvin de Haan sat down with West Carleton Online on the restaurant’s new patio to talk about being part of the brewery business.

“I’m the young pup and they are all a few years older than I am but, over the past three years we’ve really bonded together,” de Haan said of his partners Jake Sinclair, Jason LaLonde and Ryan Grassie. “Jake and I have been really good friends for a long time. Jay and I have been mutual friends through Jake, and then Ryan was the last guy to come in to the fold and he’s obviously a big part of the business. We all treat each other like brothers. Constructive criticism, or something going on that we maybe don’t like, we have an open relationship regarding that. It’s tough with four different personalities trying to run a business but we are, for the most part, on the same page and we all get along really well and that’s important and I hope this relationship can continue to grow.”

The vision for the brewery, which is also a pub and restaurant, was to create a hub and to be a part of the community.

Because the ownership group is made up of West Carleton natives, they want to support their community as well. Tuesday’s Founders’ Night is also a fundraiser. The brewery was raising money for the Engelberts family. Connor Engelberts, a Ridge Rock founder, died tragically in a workplace accident last June and community members have established a trust fund for his young, twin daughters.

“We want to be good to the community,” de Haan said. “The community has been great to us. The only thing we can do is give back. We’ve ran some events here and there for charities – the tornado, the Engelberts family – it’s tragic. It sucks, but we’ve done our best to help support those causes. It’s a really heart-warming feeling. It’s different in hockey, when you go to hospitals and visit with people. But to actually be part of a business and donating money that’s sitting in a bank account that we earned and giving it to the community, it is a really good feeling. It’s really fun and cool.”

Grassie says the Ridge Rock team had a special Ridge Rock pint glass made with Connor’s name etched in to it.

“We’ll pour one last Ridge Rock in it and then be retiring the glass in Connor’s honour,” Grassie said.

Grassie knew Connor well, having spent many hunting seasons with him at their eight-person hunt camp.

“One of our founders,” de Haan told the room during the brief ceremony to honour Connor. “Connor touched a lot of hearts and had a huge impact on a lot of people’s lives. He’s going to be a part of us and will be here until this place burns down.”

“I’m leaving in a few days to get back to work,” de Haan said. “We wanted to have an event for people who put money in and invested in our business. That’s why this is a Founders’ Night. So, it’s a small shaker for them and it’s good for us. Negative, positive feedback on anything they like, don’t like – that’s kind of what we’re using it for, but also so all the founders can hang out, kind of meet each other and go from there. I wanted to be home for one this summer, so this is why we did it on this date. We love it here. It’s a great little community and Ridge Rock only makes it better.”

Grassie says while headquarters has had a great summer, their exports are growing well as well. 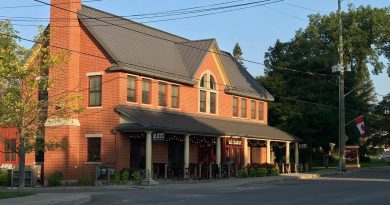 Alice’s Village Café back in business 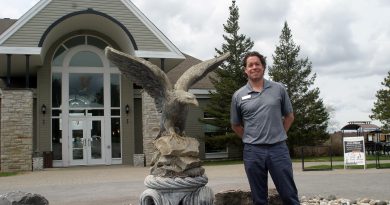 Light Up Dunrobin on Canada Day