QUYON – It was a retirement party West Carleton residents had to take the Grant Beattie to get to. It was a chance to say goodbye to the man who has delivered hundreds of thousands of people across the Ottawa River for more than 50 years, and more than a few animals too.

Don McColgan has hung up his captain’s hat from the boat best known as the Quyon Ferry.

On Saturday, Sept. 14 at the Quyon Royal Canadian Legion, Branch 231, a retirement party full of family, friends and well-wishers was thrown in Don’s honour. The Legion was filled with old photos, news clippings, memorabilia and fond memories of the now six different boats that have shuttled people across the Ottawa River between Fitzroy Harbour and Quyon.

“Lots of memories,” Don told West Carleton Online from Branch 231. “You meet so many people, you don’t remember their names. Even on holiday, down in the Dominican, people would yell out ‘Ferry Man.’”

The very first ferry to cross the river was owned and piloted by Augustus Davis around 1885. It had one horsepower. Literally.

In 1893 William Henry McLean took over the service followed by his son Angus in 1916. The new ferry, a grey paddle wheel ferry, was equipped with a Fairbanks Morse gasoline engine and replaced the horse driven ferry. McLean retired after 40 years and that ferry operated until 1957. In 1956 Ed McColgan took over the ferry for its final season.

Ed then built a new ferry, right on the Quyon shore, equipped with a Harbourmaster outboard diesel engine. This ferry, the only one actually named the Quyon Ferry, was constructed to carry six cars and would cross in about five minutes.

In 1969 and 1971, Ed built two larger, all steel ferries, the McColgan I and McColgan II. They could each hold seven cars.

“They were built in Montreal and sailed up the St. Lawrence,” Don said. “They were taken out of the Ottawa River in Hull and floated out here.”

Don started working on the ferry as a deckhand at age 10.

“I was barely strong enough to lift the chain,” Don said.

In 1973 Ed passed and sons Mark and Don ran the business for their mom. In 1991 Don purchased the family business and in 2013 broke a champagne bottle over the hull of the Grant Beattie, the largest ferry yet – a cable drawn boat, 170-feet long from ramp-to-ramp capable of ferrying 21 cars.

“It was built in Shawville and assembled here,” Don said.

The ferry has been a vital link for the 50,000 residents living in the area of the docks on both sides of the river.

“We get a lot of everyday commuters,” Don said.

And it’s an important link for the farmers as well. Earlier in the week Ernie Smith, owner of the Galetta Livestock barn, told West Carleton Online he didn’t even bother holding his twice-annual horse sale the year the ferry wasn’t operating.

Don said he noticed the days the sale is held.

“That was a big thing as the sale brought us a lot of business too,” he said.

The ferry also often served as a party shuttle for young West Carleton residents looking to head to Gavan’s Hotel on the long weekend.

“I remember there were some young lads who jumped off the dock to catch the ferry escaping from some Quyon boys,” he said with a smile.

The Quyon Ferry will stay in the McColgan family as his son Ralph and nephew Ed will take over the business.

“Both of them know the business inside and out,” Don said. “Both are Ontario residents. One lives in Arnprior and the other in Kanata.”

Don lives on the Quebec side. Don says he is retired but will occasionally take a turn at the wheel and help out with maintenance when needed, but also plans on enjoying retirement as well. 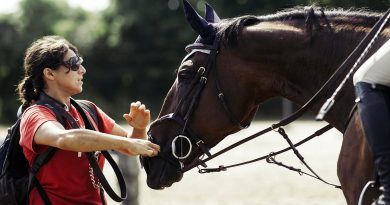