PINHEY’S POINT – If you want to learn about the history of Pinhey’s Point, you can always visit the Pinhey’s Point Historic Site and speak to City of Ottawa staff about the area’s history.

If you want the real dirt, the legends and the ghost stories, well for that, you have to go straight to the source. And that’s what West Carleton Online did last week (Aug. 14) when we visited with Megs Colbourn – a sixth generation Pinhey who lives right beside the 200-year-old Pinhey manor house in Dunrobin, just a stone’s throw to the Ottawa River.

“I’m a direct Pinhey descendent,” Colbourn, 65, told West Carleton Online from her home just beside the popular tourist attraction. “I grew up next door.”

Megs is actually an anagram for Mary Elinor Grace Snelgrove – but her friends now just go with Meg.

Her great, great, great grandfather is Hamnett Kirkes Pinhey. How we came to meet Colbourn is as much a story as her family history.

A meeting for ghost stories

In early August, Saila McRae put up a “theoretical post” on the popular Dunrobin (& area) Families Facebook page saying she had friends visiting from out of town “who are interested in creepy things and legends/stories.” She was looking for anyone who might be able to help here out.

A Facebook thread was created, and eventually Colbourn responded saying she knew a few stories and invited anyone interested to come out to her home for an evening get together of story sharing.

At one point more than 30 people indicated they would attend. West Carleton Online was invited as well but had to decline as the publisher had soccer coaching responsibilities that night. But we were sure to catch up with Colbourn later.

A date was chosen and on Wednesday, Aug. 7 more than 10 community members attended to hear some local legends and meet some new friends.

Colbourn, as well as others in attendance, shared some stories and she took them on a tour of her farm which included a look at several of her husband’s antique automobiles as well as the next door cemetery which houses many of the Pinhey family.

“It was a great evening,” Colbourn said.

But back to 1820. Colbourn’s great, great, great grandfather lived in England during the Napoleonic Wars.

“He would dress up as the enemy and delivered letters to King George I through enemy lines,” Colbourn said.

Because of his loyalty, he was granted 1,000 acres in Canada.

“He picked here because the slope allowed him to generate electricity,” Colbourn said.

Pinhey re-named the farm Horaceville after his son Horace. He named the nearby lake, bay and creek after his daughter Constance.

Pinhey brought his slaves with him to Canada. In 1826 Pinhey built St. Mary’s North March Anglican Church in Horaceville. But his wife Mary Anne thought it was too far. She would be carried to the church each Sunday in a Sudan chair by their slaves.

One of Pinhey’s favourite slaves was named Abdul.

“He died young,” Colbourn said. “He wanted to be buried in the church’s graveyard (which is located at Pinhey’s Point, right beside Colbourn’s home) but because he wasn’t baptized Christian, that wasn’t allowed by the church. So, Hamnett buried his as close to the cemetery as possible. Fifty to 75 years later, the church expanded the cemetery. It’s believed Abdul finally got his wish and is now buried in the church’s graveyard.”

Colbourn’s grandmother was the youngest of six and spoke to her often about growing up in the area.

“She remembers the Algonquin (First Nation) coming down the river,” Colbourn said. “They had picnics with them at Pinhey’s Point. The Algonquin would walk to the Carp ridge to pick berries.”

Colbourn was born in Carp and grew up on the Snelgrove Farm on 117 Charlie’s Lane. That was just one of the streets in Carp that carry a family name. There is also Juanita and Snelgrove roads. Colbourn has an older and younger sister – Constance (a family tradition, there is a Constance in every generation) and Daphne.

Colbourn’s dad Charles died of cancer in 1958 – she was only four at the time.

“Mom never remarried,” Colbourn said. “She devoted her life to the farm and us three charmers.”

Her mom, Juanita, is 103 and still a member of the Dunrobin and District Women’s Institute and sits on the Pinhey’s Point board. At the age of 80, Juanita was named the Ontario Senior of the Year and has a park named in her honour – Juanita Snelgrove Park.

“She sold her property five years ago at 98,” Colbourn said.

Colbourn married her husband Richard and the two were living in Kanata in the ‘90s. Her ‘Uncle Mac’ decided to move to Merickville and the couple seized on the opportunity to move back to West Carleton.

They bought the house that, at the time, was “deemed unlivable.”

“I was sitting out here, having my coffee and said I don’t want to go back to Kanata,” Colbourn said.

That was in 1998 and the Colbourn family was back in the area she grew up in. They called the Pinhey Estate “the big house,” and their daughter Jacci grew up getting to play in the family manor, right next door to her own home.

“When she was a little older, our daughter gave tours of the Pinhey Estate,” Colbourn said. “Knowing she was a direct descendent brought the place to life. She became a full-fledged volunteer.”

The City of Ottawa took over Pinhey’s Point in 2000 shortly after amalgamation. But that didn’t stop Colbourn’s mother’s dog from dropping by.

“Bandit became a regular,” Colbourn said. “A painter would come by to work on landscapes. He would bring a coffee and donut and a donut for Bandit.”

Colbourn says the family has had lots of unique, possibly paranormal experiences since living in the Pinhey’s Point area – the reason she was so interested in hosting the event Aug. 7 in the first place.

“One day Richard and I heard a little girl crying,” Colbourn said. “We thought it was Jacci. We called the Pinhey’s Point staff, but they said there was no problems there. Nobody else had heard it. I was clearing some weeds in the cemetery and uncovered a tombstone for an eight-year-old girl. We didn’t even know it was in there. We haven’t heard it again since we cleared all the weeds.”

Colbourn also says Richard and she have often felt a “happy presence” around the home.

“We have often smelled cigar smoke and roses,” Colbourn said. “The whole family has smelled it. One odd thing is Jacci and I have never smelled it at the same time.”

Colbourn remembers a time when a friend spent the night on the couch. He could swear he heard footsteps.

“He heard it twice,” Colbourn said. “He thought it was Richard. The second time it was so clear, he got up and looked around.”

The supernatural stuff was a regular occurrence at the Pinhey’s Point estate according to Colbourn.

“I personally haven’t had any experience with apparitions, but I know lots of staff that have,” Colbourn said. “A lot of people have heard Hamnett counting his money up in his office.”

Much of the history of the area and the Pinhey family can be found in the 1976 book Looking Back…Pioneers of Bytown and March, Nicholas Sparks and Hamnett Kirkes Pinhey written by Naomi Slater Heydon.

The book is no longer in publication, but the remaining copies can be purchased for $30. 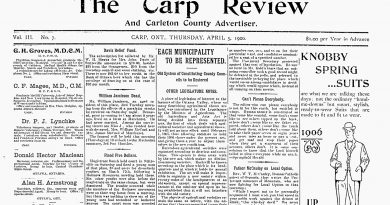