WEST CARLETON – With the start of school just two weeks away, many West Carleton parents say the province’s return to school plan is not taking in to account rural Internet limitations and forcing them to make a decision they are not comfortable with.

Yesterday (Aug. 16) was the deadline for parents to decide if their children will be going to school this September or continue their learning at home online. The Ottawa Carleton District School Board (OCDSB) released early details of the results and nearly one-quarter of elementary school students and one-fifth of high school students have chosen the remote learning option for the coming school year.

The high number of students choosing remote learning was an early surprise for the board, but for many West Carleton students, due to poor Internet service, choosing to learn in the safety of their own home wasn’t really an option.

According to the Canadian Radio-television and Telecommunications Commission (CRTC) only 37 per cent of rural households in Canada have access to high-speed Internet. That compares to 97 per cent of those in urban homes. According to the Canadian Internet Registration Authority (CIRA) rural Canadian Internet speeds are on average 10 times slower than urban speeds. COVID-19 has widened that divide. As of last April, rural speeds were 12 times slower on average. Saturday (Aug. 15), Fitzroy Harbour’s Ken Holmes ran an Internet Performance Coverage test available on the CIRA website. The test measures download speeds (see images) based on location by testing IP addresses. The red and light red sections represent between zero and 12 megabytes per second (Mbps). As you can see from the image, West Carleton is clearly in the red category. Just to the east, in urban Ottawa speeds are on average in the 40 to 50 Mbps range.

“I was going to say I will call you back on my cell, but the call would be dropped for sure,” she said. “This is such an issue and no one official will get back to us.”

Britton lives in the Deerwood Estates area near Kinburn off Panmure Road.

“We did the online thing last spring for a bit, but it always ended up in tears,” Britton said. “Sometimes mine. We just cut out and went rogue. At that point it was optional. Bun now, with the schedule, we had to make a decision. We’re about to have a have and a have-not situation based on geography. It would be helpful to have people acknowledge this. Everyone is not going to be in the same boat. West Carleton parents are being put in to a situation of sending their kids to school and not feeling safe about it, but don’t have reliable Internet to keep them home. We’re being put in to a position of having to make a really tough decision.”

The Brittons switched Internet providers last spring in hopes of improves service, but the cost was prohibitive.

School boards have offered Google Chromebooks with mobile hotspot devices for those without Internet service, but again, that doesn’t work if you live in a rural area with poor connectivity.

“A lot of decisions are being made by urban people and they are unsure of the rural challenges,” Britton said. “I think they are just throwing past at the wall and seeing what sticks. When I tell people of my Internet issues, they are shocked when I tell them I live in Ottawa.”

Regardless of whether a parent has chosen to send their child to school or stay home, there is going to be an online component.

“They have not come up with a plan that’s going to help rural people,” Britton said.

And it’s the main topic of the neighbourhood.

“It’s a constant,” Britton said. “I can share with you a history of group chats. People are getting apathetic out of frustration, and just leaving it behind.”

Some people are even leaving the community behind.

“I know of a number of people who have moved and we’re thinking of it too,” Britton said. “It’s terrible, we love the neighbourhood.”

Britton created and = volunteers her time running the West Carleton Glee Club for the last eight years. Last night she made the difficult decision to send her kids back to school for the coming school year.

“We felt obligated,” Britton said. “At least they would be in school. We don’t feel we have the option to keep them at home. If it’s not safe, we’ll bring them home. We opted to send them because at least they will be on the school’s roster. If the schools close, they will be supported by Stonecrest.”

Britton is immunocompromised so is Britton’s mother-in-law.

“That’s been a real concern for a while now,” she said. “We’re really careful. When school starts ,we won’t be visiting granny for a while and that’s devastating for everybody. It was a really hard decision to begin win, but the Internet issue really doesn’t give us a choice. School will expand our kids’ bubbles. The exposure is not insignificant, it’s hundreds of people. The second we don’t feel safe, we’re pulling them.”

Britton doesn’t blame the school board for these issues.

“This isn’t an accusation against the school and school boards,” Britton said. “The government is changing their plans every day. I have no doubt the boards have the kids as their first priority. I don’t know what the answer is, but we’re not ready for this. How are we going to support online learning? It’s very clear to me we’re not ready. I know nobody knows what to do, but they need to acknowledge that. Then we can move forward and make a plan that works. They’re forwarding a plan that doesn’t work for everyone. Education should be free and available to everyone.”

Laurie Chauvin lives in Marathon Village. She has one child, Ty, heading in to Grade 10 at All Saints Catholic School and another, Alissa, about to attend her first year at Algonquin College taking health sciences.

Chauvin spoke to West Carleton Online Friday (Aug. 14), but hadn’t made her decision yet.

“I have lots of concerns, but yes, our Internet access is one of them,” she said. “My husband has been reminding me about the deadline.”

One visit to the Marathon Village Facebook page and the top issue is Internet access. On any given day you can find at least one post from the small village’s community asking if anyone else’s Internet is down.

“Seventy-five per cent of the day Ty will be at home online with me and Alissa,” Chauvin, who often works from home, said.

Chauvin says their household is with Xplornet.

“We can’t get anything else,” she said. “Some people can get NorthWind, but not us. We can’t even get one Mbps downloads. In the height of homeschooling and working from home, there was no Internet. If I receive an email with any graphics, it will take more than 10 seconds to download. Most days we can’t even get Netflix. Ty couldn’t do the Zoom classes las spring – we couldn’t watch any of the videos his teachers were sending.”

Chauvin can’t believe the province was not prepared for these rural issues.

“The number of people who don’t know this is an issue, it’s surprising,” she said. “Even the teachers don’t know. Imagine doing Grade 9 math without any of the resources to do Grade 9 math.”

Chauvin says she contacted Kanata-Carleton MPP Dr. Merrilee Fullerton a couple of times, last week most recently, but “got her thank for your feedback standard reply.”

Chauvin has also tried contacting the school board.

“I find social media works better than trying to call anyone,” she said. “The schools are empty, I don’t want to go through message hell. I sent four or five messages via Facebook. Last night (Aug. 13) I sent a message saying how can I make a decision when I can’t get any feedback?”

That has forced Chauvin to make her decision not based on health issues, but connectivity issues.

“I feel like I have to send Ty to school because we have crappy Internet and that’s a terrible place to be in,” she said. “He wants to go, which I’m taking in to account. I’m more concerned about the busing then the school – it’s a 50-minute ride on a crowded bus with no oversight.”

Chauvin pays $120 a month for her current Internet service. She says that doesn’t include her data costs she sometimes has to use while working. Chauvin says she calls Xplorenet weekly to complain, not because she expects her service to magically improve, but to create a paper trail.

“If I call and complain we can issue a complaint with the CRTC,” Chauvin said.

CRTC will issue a refund based on the difference between the service the Chauvins pay for, and what they actually receive.

“We pay for up to 10 Mbps download speeds,” she said. “We never get that. We are usually between three and four Mbps.”

Last spring, the school board gave the Chauvins a mobile hotspot USB key, but the results were predictable.

The OCDSB is expected to update its back-to-school plan on Wednesday (Aug. 19), including a revised high school schedule. The board’s initial proposal proved controversial when parents discovered secondary students would be at school for as few as five hours per week.

5 thoughts on “Online school no option for WC parents” 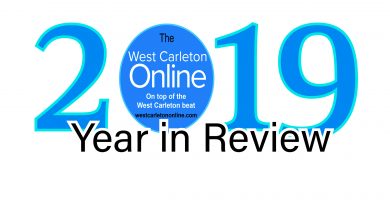 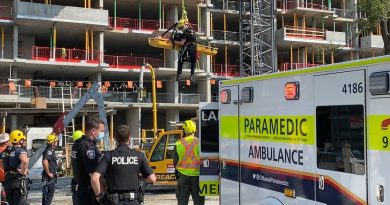 High-rise rescue in Lowertown this morning