According to Ottawa Public Health’s (OPH) Saturday (Nov. 13) report, one more person has entered the hospital, bringing the number of current patients up to 25, while two more patients have entered the intensive care unit which now has four patients.

Ottawa represents about 6.8 per cent of all cases reported across the province yesterday.

Ottawa’s total confirmed case count since the pandemic started is 31,323.

Ten of the 45 new cases involve children nine-years-old and under; four are kids ages 10 to 19; and eight involve young adults ages 20 to 29. Among the five new active cases, four are in the under nine age group and two more are in the 20-29 age group.

There are four fewer active cases among the 10 to 19 age group.

In the last 24 hours, 40 people have cleared themselves of the virus.

No new outbreaks have been declared anywhere in Ottawa, although nine outbreaks are ongoing in healthcare institutions, seven in childcare and school settings and two in the community. The rate per 100,000 residents of COVID-19 reported in the last seven days has increased to 26.6, from Friday’s 25.3.

CANADA – Health Canada has authorized the use of the Moderna Spikevax COVID-19 vaccine as a booster shot for Canadians.

The federal health agency confirmed the news in a public statement Friday, (Nov. 12), adding the shot is designed to help people maintain their protection against the virus over time.

The booster shot is an extra half dose (50 micrograms) of the vaccine given after the completion of the primary vaccine series.

The booster is authorized for adults 18 years of age and older, to be used at least six months after an individual has completed their primary vaccine series.

Health Canada said evidence continues to show that being fully vaccinated provides strong protection against serious illness, hospitalization and death from COVID-19, including against the Delta variants.

Gateway speed limits not for WC 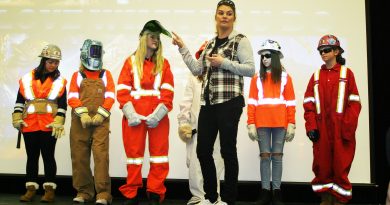