CARP – The power, speed and grace of a jet fighter, only tinier.

The Ottawa Valley Jets (OVJ) hosted their annual radio controlled mini-jet rally at the Carp Airport and it was an opportunity for people to see the incredibly steady hands of pilots controlling turbine-powered jets capable of flying at speeds well over 300 kilometres an hour.

“For some guys it’s the speed, for the others it’s the aerobatics,” Ottawa Valley Jets event organizer Ken Park said.

This is the third year the OVJ have held the event at Carp. The have formed a mutually beneficial partnership with Carp Airport Manager Mark Braithwaite.

“The jet guys are always looking for a big space,” Park said. “They used to have an air show here every year to support the airport’s charities but can’t do it anymore. So, we partnered with Mark and he thought it would be a good fit. Clubs go from city to city to attend these things. And it raises a little money for the airport.”

About 15 pilots came out from all over the area and each usually brings about two jets. Jets can start at around $500 for a foam, electric-powered jet, to several thousands of dollars. They use real jet turbines and burn real jet fuel. They need about 850 feet (259 metres) of runway, as well as space for the trailers and equipment.

“Everything is just made on a much smaller scale,” Park said. “The technology is unbelievable and getting better every year. There’s nowhere to go after this – maybe rockets.”

The rally is not a competition, just an opportunity for enthusiasts to get their jets in the air and stretch their wings. Park says there are about three or four rallies a year.

Park says, with expansion at the airport, they know their time at the Carp Airport is finite.

“We don’t see this as going on for years and years with the growth, but we’ll take it as long as we can,” Park said.

He said the pilots love the flying, but these events are more than that.

“A lot of it is the social part too,” Park said. “We call this totally casual. We are all meeting several times a year. I’ve made friends with people from as far away as Kentucky.”

To get a view from the cockpit of one of the jets at the Carp Airport rally, click here. 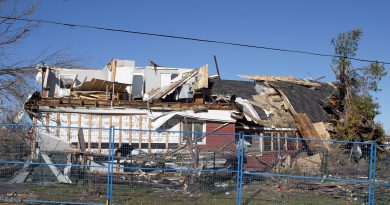