WEST CARLETON – West Carleton is now under a severe thunderstorm watch and Environment Canada is warning residents “a tornado is also possible.”

“Conditions are favourable for the development of dangerous thunderstorms that may be capable of producing damaging wind gusts and large hail,” Environment Canada said.

weather organization listed hazards such as wind gusts up to 110 kilometres per hour; up to ping pong ball size hail; and atornado is also possible.

Environment Canada says the warning covers this afternoon in to the evening.

“A line of thunderstorms has developed near Georgian Bay and is tracking east towards the area,” Environment Canada Said. “This line of severe thunderstorms is expected to move over Eastern Ontario this afternoon and evening with very strong winds and hail.”

“Notice the curve to the storm front?” weather historian Rolf Campbell said, referring to the photo above taken at roughly noon today. “That’s the signature of a derecho (a widespread, long-lived, straight-line wind storm that is associated with a fast-moving group of severe thunderstorms). We’ll have to see how far it gets, but if that hits Ottawa, it would mean very strong damaging winds for the entire area (still several hours away).”

Severe thunderstorm watches are issued when atmospheric conditions are favourable for the development of thunderstorms that could produce one or more of the following: large hail, damaging winds, torrential rainfall. 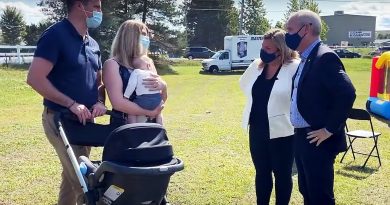