FITZROY HARBOUR – Current Ward 5 Councillor Eli El-Chantiry says he has plenty of energy and is ready to continue representing West Carleton at the council table.

“I still feel like I have a lot of energy,” he told West Carleton Online from Fitzroy Provincial Park during the first performance of the Concerts in the Park series Thursday, July 6. “I never miss a meeting, so the energy and the focus is still there. There’s ups and downs, but there’s quite a few ups and it feels good to work with good people and achieve a goal together.”

The former Constance Bay Lighthouse Restaurant proprietor has represented Ward 5 at Ottawa City Council since 2003. He is the only elected representative to serve West Carleton since amalgamation. Dwight Eastman who was mayor before amalgamation, was appointed as councillor for two years following amalgamation and served out his term without seeking election.

To understand how long those 15 years are, El-Chantiry said something on Thursday, you never would have heard him say in any of his first two terms.

“We had a bit of a social media frenzy,” he said. “I was very happy with the announcement.”

El-Chantiry said he received about 400 comments on his Facebook and Twitter accounts after declaring. He said a lot of people were asking him why he took so long to file.

The next four years are going to see a lot of change in the surrounding area El-Chantiry promises.

The Light Rail Transit (LRT) is supposed to be completed by November and work on the second phase to Kanata will be beginning as well.

“The Department of National Defence has moved right next to us,” El-Chantiry said of the new DND complex in Kanata at the former Nortel site. “There is quite a lot of growth in the west. It’s going to create a huge impact on the roads. I’m already trying to put a plan in place.”

Carp Airport and the Carp Road Corridor growth is also an issue in West Carleton.

“There’s a lot of work in front of us,” El-Chantiry said.

El-Chantiry thinks experience is an advantage for whomever represents West Carleton.

“There is a learning curve,” he said. “It takes a term to learn the job. You’re not just dealing with one issue at a time – fire, police, paramedics, roads, garbage, recycling, development are all ongoing. Then you have to learn the rationale. There’s no point just saying I’m against something. You have to find a solution.”

El-Chantiry says the job is a lot of work, but the perks are pretty good too. For the last two years, El-Chantiry has been the main sponsor of the Concerts in the Parks series. He said it was too important to lose an event that has more than 20 years history in West Carleton.

“I love it,” he said. “To me, it’s a great feeling to walk through the crowd and have people thank me for keeping the tradition alive and that feels good.” 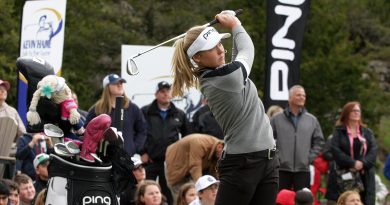 Brooke Henderson honoured with Ottawa’s Key to the City