DUNROBIN – For the first time this year the sun was shining, the wind was calm, there were no weather advisories —it was a great day for a party that has been a long time coming for the Dunrobin Community Centre.

On Sunday, Feb. 10 parents, kids and community members filled the tiny centre, spilled out on to the ice and surrounding snow piles and enjoyed a beautiful day playing outside, listening to music and enjoying the first big party at the community centre since the Sept. 21 tornado.

MP Karen McCrimmon summed up the atmosphere and the reason nicely.

“To celebrate,” she said. “The people have been through so much and they just keep chugging along. It’s amazing.”

WCDR co-chair and DCA president Greg Patacairk was providing live music for those enjoying the perfect skating conditions. Ottawa Fire Services was there, showing off their ladder truck. The Dunrobin and Area Women’s Institute provided more cookies, hot chocolate and coffee than the packed community centre could consume. There was a happy buzz of conversation surrounding the party.

But, like the nearby village, there were still plenty of reminders of the tornado’s aftermath. Volunteers set up a table of found photos and mementos hoping to reunite them with their owners after being scattered throughout the forests, swamps and fields of West Carleton and, in some cases, beyond.

Leo Muldoon, who was seriously injured during the tornado, proudly showed off a 2018 Tornado Survivor t-shirt. It read ‘it takes more than a gust of wind to keep this guy down.’

Roman Doré, 6, showing off his skating skills on the outdoor rink yesterday, was one of several children trapped in the community centre when the tornado struck. His daycare provider and her charges huddled in the bathroom as the tornado roared through and destroyed trees all around. The building was miraculously spared – in part, thanks to its lack of windows, brick exterior and low profile.

“It was terrifying for him,” his mother Evelyn Doré told West Carleton Online. “There were some after affects. But he’s doing great now. Now that his best friend’s here, we won’t be able to pull him off the ice.”

Dunrobin native Emersyn Rousseau, 5, enjoying the egg and spoon race on skates, had to commute from Stittsville to attend the carnival.

“We lost our house, but physically were fine,” her father Ben said.

The Rousseau family are Porcupine Lane residents – one of the hardest hit areas.

“We hope to start building in April,” he said. “And be back in by August.”

But there were also reminders of the generosity the community has received since the tornado struck. Not only did the Dunrobin WI bring cookies, they also brought quilts. Given to them by the Coningsby WI, based in a community near Toronto. The quilts were donated to them by the Erin Village Quilters and transported by several drivers to make their way to Dunrobin.

“We hope they bring some comfort,” the Coningsby WI wrote in a note.

Carnival organizer and WCDR co-chair Alex Lesnick was feeling the love as well.

“It’s beautiful,” she told West Carleton Online as the carnival wrapped up. “That was really nice. It’s nice to see how far the word has spread. We’re at the point now where it’s not sensational in the news anymore, but people are still helping. The ice was in wonderful condition. It was so nice to see the community come together and so great to see them make the effort to be here.” 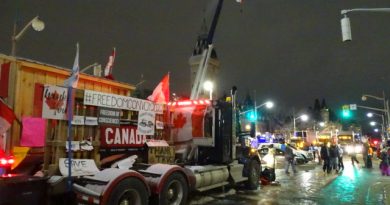