STONECREST ROAD – In a short post in the June 19, Carleton Landowners Association (CLA) newsletter, Shirley Dolan shared the news with her members she was stepping down from her position as president.

“It has been my pleasure to serve in this position for over six years,” she wrote. “Along the way, I have met many fine people and learned a lot about property rights.”

On Thursday, July 5, Dolan sat down with West Carleton Online at her kitchen table to talk about her tenure as president with the CLA.

The CLA’s role is to promote and defend the property rights of Ottawa and Carleton County by ensuring residents are thoroughly informed and educated with respects to property rights. The CLA also strives to be an effective voice at all political levels in support of property rights.

Dolan will continue as treasurer, membership coordinator and communications, although she hopes to pass the communications role on when possible.

Dolan says no matter who the president is “they bring a lot of energy to their area.”

West Carleton has enjoyed that energy since 2011.

“One of the things I think I brought was a little more structure,” Dolan says of her term.

The CLA has no set number of board members and rarely needs to hold an election for the president position.

Dolan was acclaimed and so is the new president.

“We offered the position a few times at the annual general meetings during my term but there were no takers,” she said.

Despite the laissez faire approach to leadership, the CLA is organized, motivated and proactive.

Dolan has a few memories of her tenure that stick out for her.

In 2014 the CLA hosted a Property Rights Conference that had about 100 attendees.

“That was interesting to organize and I had lots of help,” Dolan said.

In 2016 the CLA got involved in Ottawa’s stormwater levy. CLA representatives attended seven of the eight city-organized public meetings.

“We tried to explain to staff why what they were doing wasn’t right,” Dolan said. “We didn’t get exactly what we wanted, but I think it helped. It was an opportunity to work with urban residents and speak as one voice.”

In 2016, the CLA involved itself in the Land Evaluation and Area Review (LEAR) process the City of Ottawa was undertaking. The city was using a new system from the one that was developed in 1997. The LEAR system’s primary component is the identification of land comprised of soils. The LEAR was used as part of the review of the Official Plan and will inform the assessment of applications in the Agricultural Resource Area designation, such as new renewable energy projects or new agriculture-related uses. In effect, LEAR could restrict property use.

“We tried to tell people what the impact is and what they could do,” Dolan said.

The CLA wanted landowners to know pre-designation was cheaper and to get involved before they received a designation from the city.

“It could cost tens of thousands of dollars to get a designation changed,” Dolan said.

The CLA was also concerned by the city’s Site Alteration bylaw passed this year. The bylaw was developed to protect agricultural resources and natural heritage features from negative impacts caused by site alteration, and to prevent drainage issues and public nuisances resulting from site alteration activities.

“We were quite concerned about this,” Dolan said. “It seemed like it was a way for a neighbor to complain if they didn’t like their neighbour. Once in the system it seems your guilty until proven innocent.”

The CLA participated in a review of the bylaw with the city. While Dolan says working with city staff wasn’t productive but had success further up the chain.

“Once we got to the Agriculture and Rural Affairs Committee we were dealing with elected officials and I have to commend them for what we were able to do,” Dolan said. “We were able to get the wording changed so it was perfectly clear farmland was excluded from the bylaw. There was a better clarification of what natural heritage areas are and what it means.”

The bylaw comes back for review in two years.

“That’s something we’ll have to watch,” Dolan said. “We know the lobbyists on the other side are very strong. It’s important we give balance to the issue.”

Dolan sums up her experience with a focus on people.

“The most important thing is the people I’ve met,” Dolan said. “So many interesting and knowledgeable people out there. It was interesting working with the city. I don’t think the communications are working. People don’t understand how these decisions are going to affect them. People should be able to use their property without interference from the government.”

She also has a bunch of thank yous to hand out.

“I’d like to thank the board of directors and the people I’ve worked with over the years,” Dolan said. “The members and the non-members who have supported me over the years. There’s too many to name.” 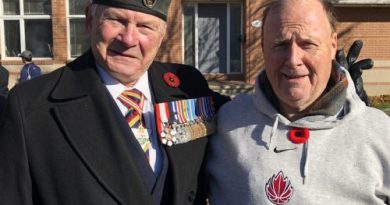