The municipal election is over, and the result are staggering. Not so much the winners mayor-elect Mark Sutcliffe or Clarke Kelly’s win in Ward 5.

What is staggering is that 47 per cent of eligible voters chose Ward 5’s municipal leader. Across the city less than 44 per cent chose Ottawa’s new mayor.

More shocking, those are better turnouts than most of Ontario’s other municipalities.

Since the beginning of spring, we’ve heard the issues. We have to fix the LRT. We have to get rid of the Watson Club. We need to spend more wisely. We need change.

In the aftermath of the election, it appears more than half of everyone who shared their opinion with me on what’s wrong with this city, this ward, politics in general, and our politicians in particular, didn’t bother to vote.

With lows in some municipalities below 40 per cent turnout, the media are chalking it up to voter fatigue. What are they fatigued from? Not voting in the provincial election?

There was no shortage of issues needing fixing and we could do so through the election. Specific issues, such as road repair. Broader issues such as representation, lobbyists and targeted campaigning. Even issues made up by the voters.

In my electoral district of the Town of Arnprior (and the upper-tier municipality Renfrew County) one growing social media issue involved the least glamourous part of any municipal election, the school board trustee election.

In Arnprior, the total operating budget for the town for 2021 was just under $23 million. The Renfrew County District School Board (RCDSB) 2021 expenses were $141.2 million. But come election time, absolutely no one cares about the trustee vote. Dollars to donuts, I’ll bet most Arnprior voters couldn’t tell you who won the trustee election in their district. Often the position is acclaimed. Usually by a retired educator, sometimes by a student not a year removed from graduating high school. If it’s a member of the public, that person is usually disgruntled and a one issue candidate. Usually, the trustee position is filled by a person not remotely qualified to manage a $141 million budget and lead negotiations with highly organized unions. I mean how many people are qualified for that? But that’s the job.

What was the leading Renfrew County issue heading in to last Monday’s election as it relates to education? Well, here’s where it gets bonkers. It was human litter boxes.

On Oct. 11, the RCDSB and its Catholic counterparts felt the need to release a statement definitively saying “the RCDSB and RCCDSB do not have, and have never had, litter boxes in any of our elementary or secondary sites.”

Litter boxes. The two boards had received so many phone calls, emails and message related to the issue, they felt they had no choice but to put out a statement saying there are no human litter boxes at any of their schools and further they do not collect data related to students’ spirit animals.

Despite that, on the RCDSB’s Facebook page where the statement was posted, there is a long chain of commenters including several convinced, absolutely convinced, there are absolutely litter boxes in Renfrew County schools. They absolutely swear to it.

While the idea on its own is ludicrous, the thought there are human litter boxes in schools just does not stand up to any kind of critical scrutiny.

Our schools are filled with, by far, the largest demographic of people who are constantly told to “put that phone away,” but not one single student, not even one single disapproving educator, has been able to produce a single photo of these litter boxes, allegedly sanctioned by the school board officials themselves. In a world of Tik Tok, Instagram, Twitter and Facebook, led by the very people who populate our schools but, unbelievably, nobody thought to snap a photo? As the young kids say: ‘pictures or your lying!’

Now I haven’t met everyone in life, not by a long shot, but I have also never met one single human being, whether they like wearing costumes or not, who demands the privilege of (and I’ll speak politely despite the fact I think blunt talk would provide better context) using a litter box in public surrounded by both friendly and non-friendly peers to do something that will negatively mark them for the very rest of their lives. I have never even had a philisophical argument over litter boxes being a human right.

I get the politics behind the original rumour starters – an effort to delegitimize gender politics.

Yet read the comments section on the school board Facebook post. There is a segment of the population that truly believes litter boxes exist in our schools, approved by board officials, and used by students (none they know of course) and no amount of lack-of-evidence, official statements or common sense is going to convince them otherwise.

What does that have to do with the election? The statement came out two weeks before the election. The people reacting to it on social media are the voting public.

There are very real issues with our school board. Their $141 million budget is funded by the lowest wage earning per-capita upper-tier municipality in the entire province.

Millions, every year, are wasted in school board budgets. I don’t know how many tens of thousands are spent on feeding their own staff using taxpayer dollars each and every year at meetings, conferences and PA Days, or because it’s a Friday and everybody worked really hard that week. Millions spent on flashing, computerized signs for each and every school – so once a year they can advertise that exams are coming up. Tens of thousands spent on speakers for parent council or teacher conferences attended by no one other than the event organizers themselves. Thousands on trendy furniture like posture correcting ball chairs or standing desks, that just get piled in the corner two weeks after being bought because staff realize they’re just not that comfortable. Discretionary budgets for directors, superintendents, heck, even principals – envelopes of money these various managers can spend on whatever they want with no oversight, no follow up and no pesky line item on the publicly available budget document. All of this needs to be scrutinized.

Every two years, professional, highly paid negotiators come in to negotiate new contracts for board staff (heaven forbid we negotiate a longer-term, five-year contract, to you know, save some money and create some stability within the education system) with the aforementioned very underqualified trustees, who are supported by board staff. That’s right, everyone in the negotiation room, on both sides of the table, are all paid by the same person – the taxpayer.

In a larger sense, we pay for two different school boards (in English) to do the exact the same thing, except neither board agrees on the facts behind creation and science.

But for this election, as it relates to the Renfrew County school system anyway, the number one education issue is whether or not there are board-sanctioned litter boxes in our schools.

In September West Carleton Online enjoyed 16,085 pageviews. A bit of a dip from the month before, so we are going to chalk it up to voter fatigue.

Don’t worry, we get it, after three elections in a row, the voters are tired of not selecting the people who will make the decision on where half your revenue will be spent. If you too are suffering from voter fatigue but toughed it out long enough to get to word number 1,300, you are forgiven for taking the rest of the column off. Here are our Top Five stories for September. 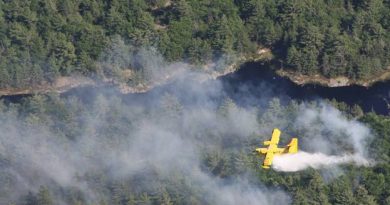