It was a full day for staff as the clinic got underway at 9 a.m. and OPH site commander Dale Johnson said would run until approximately 7 p.m. at the time West Carleton Online stopped by shortly before noon.

The clinic was initially planned as a follow-up to West Carleton’s first OPH-run vaccination clinic held over April 1 weekend. The invitation-only clinic was primarily for rural residents needing their second vaccination but some in attendance were receiving their first shot, Johnson said.

““The priority for this pop-up clinic is to reach those older adults (75-and-older) and recipients of chronic home care that received their first dose at a rural pop-up in early April and do not currently have a planned second dose appointment at a local pharmacy, primary care team or community clinic,” El-Chantiry said at the time of the pop-up clinics’ announcement.

“We called all rural residents and offered them an opportunity,” Johnson said. “This is a fantastic location. We wouldn’t have been able to do this anywhere else in West Carleton for so many.”

During the April 1 clinic at the West Carleton Community Complex, OPH vaccinated 450 people over three days, while yesterday the goal was 300 over one. Just east in Kanata at the Canadian Tire Centre pop-up clinic, OPH staff expect to vaccinate 2,000 people a day.

While El-Chantiry said the goal was to reach those at the April 1 clinic who still needed their second dose, but Ottawa’s rural residents came from afar to attend.

Greely’s June Roy grabbed the opportunity to cross the city and get her second shot when called by OPH last Thursday (June 17).

“I had my first shot in Osgoode,” Roy told West Carleton Online moments before entering the clinic. “My second shot was scheduled for June 30 but when they move you up, you run. Yes, I’m very excited.”

Roy says she has missed visiting friends and family although her four-month-old granddaughter lives with her and her family.

“And we feel very fortunate we do live with her,” Roy said. “I think we’re all going ‘woo-hoo.’”

Roy said she had no side effects from her first shot.

There were certainly West Carleton residents in attendance as well.

The couple were originally booked to attend a clinic in Almonte in August, so were happy to move up.

“Our daughter (and four of their grandchildren) is in Edmonton and we haven’t seen her since January,” Elizabeth said. “We’re not sure when we will see them as the don’t really want to travel during the pandemic.”

When they last did get to see their family, it was over Christmas.

“We stayed outside,” Dan said. “It was fairly mild, but we would have sooner been inside.” 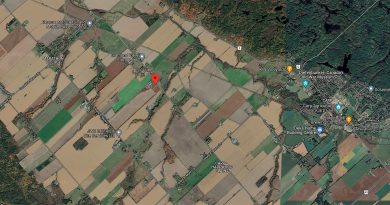