CARP – The Huntley Community Association’s (HCA) 13th annual Carp Santa Claus Parade is roughly two weeks away (Dec. 10) and for four of the original organizers, it is a labour of love.

Thanks to the current conditions, the HCA parade has undergone a lot of change over the last few years, from a daytime event, to a stationary event the last two years, to this year’s event which will happen in the evening for the first time, but one thing has remained consistent, the four Carp ladies who organize it.

Although an official HCA event, non-community association members, Carp-area residents Evelyn James, Sandra Wallace, Pat Ross and Annie Craig, have been integral to its creation, and keeping it running since 2009 through the cold, the rain, the pandemic and several other challenges along the way.

“So, these girls wanted to have a parade,” HCA director Wanda Clark told West Carleton Online from the West Carleton Amateur Sports Club last week (Nov. 18). “They just love the parade so much, the want to make sure it happens. They’re not part of any organization. They just came together to help organize.”

Making it happen has been incredibly challenging, especially over the last few years. In 2019, the parade had to deal with pouring rain. That was nothing compared to the next two years. Four months later the world was effectively shut down due to the start of the COVID-19 pandemic.

The organizers would not only persevere but organize one of the only Christmas parades held in the province. A lot of changes had to occur. For one, the ingenious idea organizers came up with was having the parade stand still and the crowds drive through it, keeping everyone safe from the killer pandemic.

The only show in town in 2020, the parade was a huge hit with cars lined up on all four roads in to Carp and beyond. More than 900 vehicles went through the parade that night. Organizers had to lengthen it by hours to make sure everyone got a chance to see it. And they had to do it on a very rainy evening.

The only hiccup in the parade’s history came last year. Another stationary parade was planned in 2021, but the weather made sure it would not happen. A very powerful windstorm ravaged the Ottawa Valley and organizers had to cancel the event at the last minute to ensure the safety of everyone.

Despite that, the parade’s legacy lived on with the Carp community filling two pick-up trucks with food donations for the West Carleton Food Access Centre (WCFAC), the prime beneficiary of the parade.

It’s back on this year on Dec. 10, and once again organizers have added a twist. The 13th annual parade will happen in the evening (6 p.m.) allowing float organizers to pull out the Christmas lights.

“It was the HCA that recommended it,” James said. “They liked the evening part of the static parade. So, we’re going to follow the night theme.”

The four ladies think the Carp Christmas tradition is an important part of the community.

“Oh, just to keep it alive,” Wallace said answering why they keep coming back year after year. “We call ourselves the founders. We were all on the board at the time of the first parade.”

But the four have known each other a lot longer than that.

“All of us went to Kindergarten at Huntley (except Craig, who is a Cobden-area native),” Ross said.

With just over two weeks to go, there’s still lots of work for the volunteers to do. They are still working through the permit process with the City of Ottawa.

“One of the difficulties is getting in to the Christmas mood in October,” Clark joked.

They have 20 confirmed floats but are looking for more (there is no cost to enter a float – but a financial donation to the WCFAC is appreciated).

“We’ve had some neighbourhoods put in floats,” James said. “They put in a float and then have a party in the neighbourhood after the parade.”

While organizing the float is for the community, fundraising for the WCFAC is a big part of why they continue to do it. Donations will support the WCFAC Christmas program.

“I would say one of the biggest reasons we do it is for the food bank,” Craig said. “What the parade collects goes a long way.”

“They’re not looking for gift cards,” Clark said. “The WCFAC will use the cash to tailor the gift cards to the family, so we’re encouraging cash donations.”

No matter how the parade turns out, the community always supports it.

“It’s always been super successful,” Wallace said. “Even in 2021, I couldn’t get over the amount of food in the Carp Agricultural Hall. It was filled from the door to the stage and money too.”

Companies like Aecon, Waste Management and Goldie Mohr have stepped up to donate services, equipment and support.

“We do have that community support,” Wallace said. “That’s the Carp spirit. We all have deep roots.”

And the organizers expect they will continue to volunteer their time to organize the parade.

“When we started the parade, we said it would never die,” Craig said. “Even if we have to force our kids to do it.”

The organizers are still looking for event day volunteers to help with traffic control. They have 40 slots to fill.

But whether you are helping out with the parade, or just enjoying it from the sidewalk, “just come out and have fun,” Clark said. “We’ll see you on the 10th.”

To register a float, volunteer or for more information contact Annie or Sandra at oldcarvintagethread@gmail.com or call 613-558-8286. 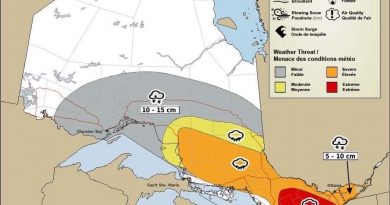 Winter storm to put final stamp on 2019 in West Carleton