CARP – More than 2,000 area residents came to pay their respects to those who paid for our freedom with their lives at the fourth annual Remembrance Day service at the West Carleton War Memorial this morning (Nov. 11).

Starting at 10:40 a.m., it is a service that has grown in numbers each year as the four-year-old memorial becomes the preferred spot to honour our fallen in rural west Ottawa. The service is an appropriate and touching tribute to our veterans hosted by the volunteers of the West Carleton War Memorial, the Anglican Parish of Huntley, St. Paul’s and Dunrobin nited churches, the Village of Carp Business Improvement Area and the Carp Fair.

“This soldier represents the best of us,” Parish of Huntley’s Rev. Canon Baxter D. Park (retired commander) told the huge gathering referring to the cornerstone of the memorial – a statue of a soldier reading a letter from back home.

It was a cold morning, but the skies were clear and the expected 10 centimetres of snow would not begin to fall for several more hours.

St. Paul’s and Dunrobin united churches’ Rev. Debbie Roi led a prayer which was followed by the laying of wreathes by attending dignitaries and organizations accompanied by the voices of the Goulbourn Male Chorus. Roi then gave a blessing.

God Save the Queen was sung before Park led the dismissal. The attendees were invited to lay their own private wreaths as well as their poppies on the memorial plaque following the service.

After the service, attendees made the steep march up Falldown Lane to attend the Carp Agricultural Hall for a free light lunch. Several veterans and current members of the military headed to Alice’s where Hirtle annually offers a free meal to current and past members of the Canadian military on Remembrance Day.

Emily Barry is a member of the Royal Canadian Sea Cadets Corps Centurion in Kanata. The cadets were volunteering their time as escorts to those laying wreaths.

“When I found out my daughter was going to be there with the sea cadets, it was an opportunity I couldn’t let pass by,” Ed told West Carleton Online in the Carp Agricultural Hall following the service. “It was a good opportunity to be with my daughter.”

It was the first time either of them have laid a wreath at a Remembrance Day service.

Ed was laying a wreath on behalf of the OPS, and said he very much enjoyed the Carp service.

There is a lot of military history in the Barry family. Ed’s grandfather fought in World War Two. Sgt. William Joseph Barry was a member of the 59th Newfoundland Heavy Regiment.

He was wounded in the war when hit in the right shoulder by shrapnel.

“He was a tough guy,” Ed said. “He was a boxer. He was a stevedore. He wouldn’t let the doctors remove the shrapnel. It was a reminder of the friends he left behind.”

Ed’s father James Barry was also in the military and served on a peacekeeping mission in the Middle East in 1979 with the Signal Corps. James also has a connection to Carp having worked at the Diefenbunker doing tele-scripting when the bunker was an active top-secret facility. Ed also has a great uncle that fought in the Boer War and his grandfather’s brother also fought in World War One.

Ed was never in the military but as a police officer “serves in another way.”

Ed was police in Toronto before moving to Carp in 2009. He said he’s been hospitalized five times in the line of duty.

“I am friends with a couple of guys who have been shot,” Ed said. “I knew some police officers who were killed in the line of duty.”

Despite the danger of serving, Ed is happy his young daughter is a sea cadet and trending towards a career in the military.

“It looks like the legacy may keep going,” he said. “She’s really enjoying the cadets. She’s looking at the Coast Guard. She loves the water.”

While Emily is pretty shy, she did say “it was pretty good,” to be able to escort her dad to the memorial.

Her dad was a bit more effusive.

“It was fun to be here with her and I’m proud she’s getting involved,” Ed said. “It’s a real leadership opportunity.” 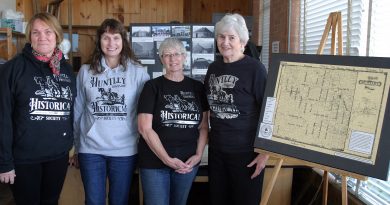 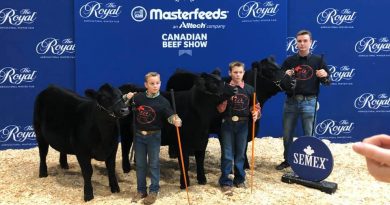