CARP – This year’s West Carleton War Memorial Remembrance Day service was closed to the public due to the current global COVID-19 pandemic.

Right next door to the memorial is the Carp Commons Retirement Village, home to six veterans between the ages of 102 and 82. They weren’t going to let a pandemic stop them from paying their respects to their fallen brothers and sisters on Remembrance Day.

Micklethwaite is the newest veteran to join the Carp Commons crew. He moved in last September with his wife Margaret, 95.

“We never settled down before,” Margaret told Carp Commons’ Melanie Webber (due to COVID-19 restrictions in place West Carleton Online was unable to meet directly with the veterans).

The two moved to the Carp area because their daughter married in to the Argue family and the parents wanted to be close to family. They finally decided to settle down after more than 100 countries visited.

“Their apartment is full of things from around the world,” Webber told West Carleton Online.

Ken was stationed on a Royal Navy minesweeper on June 6, 1944. Helping clear Omaha Beach for American soldiers for the D-Day landing. He was on one of more than 6,200 naval vessels that helped deliver 132,000 soldiers to the beaches of Normandy.

Ken was born in Barnsley, England Nov. 7, 1918, just days before the end of the First World War.

“It was my duty,” Ken, a member of Britain’s Coastal Forces, told the Ottawa Citizen in 2019. “It seemed the proper thing to do then: Go to war to defend yourself instead of letting Hitler and his bunch run all over us.”

Ken’s ship crossed the English Channel on the evening of June 5, 1944 and cleared one of the approaches to Omaha Beach. When the task was complete, the ship cut its engine, floated offshore and waited for the arrival of the main convoy hoping it wouldn’t be seen before that. When the convoy arrived, and bombardment of German positions began around 6 a.m. U.S. soldiers poured on to the beach in an effort to capture the key stronghold.

Those onboard Ken’s ship collected the bodies of dead soldiers that floated from shore. Following the war, Ken married Margaret in 1949 and was ordained a Methodist minister.

All of the veterans have stories from a life lived.

Leroux was a captain in the air force. He flew Queen Elizabeth and Princess Anne on a tour of northern Canada for Princess Anne’s 16th Birthday. Leroux still carries his flight log from his days of being in the air force. After completing his time in the military, he became an aircraft investigator for the safety board.

Patterson was also in the air force. He was an inspector for the aircrafts and boasts bouncing current Prime Minister Justin Pierre Trudeau on his knee when he was just the son of a prime minister. Patterson also remembers taking Governor General Georges Vanier’s wife Pauline Vanier on a trip to the Artic.

Vernoy was a corporal in the air force and worked as a mechanic on aircraft in Holland. German soldiers occupied his family farm and lived side by side with his parents and eight brothers and sisters.

Hedley was also a corporal in the air force. He was an aircraft engineer fixing radios in Lancashire, England. Hedley moved to Canada in 1968 and worked for the government in the travel bureau for many years.

Bridle was a navigator for the air force. He suffered ear damage while on duty. Bridle became an Air Cadet teacher after serving.

Following the live-streamed Remembrance Day service on Nov. 11. When those who organized the even, and those who were invited to attend, and those who stopped by to witness the service, some 37 people in total, had moved on, the six veterans visited the West Carleton War Memorial and paid their respects in a small, mostly silent service. 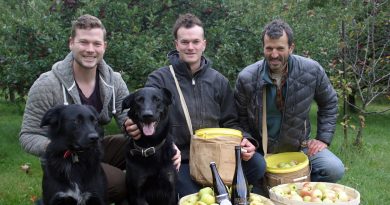 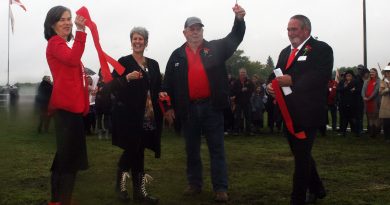