ONTARIO – COVID-19 confirmed cases and deaths continue to climb as the country hopes the peak is reached soon.

A Bobcaygeon, ON nursing home hit hard by an outbreak is also reporting two more deaths of residents, bringing the total to 16.

Bobcaygeon’s local health unit believes the outbreak at Pinecrest Nursing Home is the largest in the province, with at least 24 staff members also infected.

Yesterday there were an additional 426 confirmed cases, the largest jump in Ontario during the pandemic and that increase represented a 22 per cent jump.

Ontario is also reporting 405 people are hospitalized with COVID-19, including 167 in intensive care, and 112 of those patients are on ventilators.

Ontario’s backlog of pending test results continues to drop from 3,135 Wednesday to 2,052 today,

as more testing capacity is added.

Ottawa is up to 194 cases of COVID-19 as of yesterday (April 1), as the local health unit confirms 50 more local patients carrying the coronavirus.

That includes a new case at another community institution: the Ottawa-Carleton Association for Persons with Developmental Disabilities (OCAPDD).

The jump in newly confirmed local cases coincides with Ontario’s largest single-day increase of 426 on Wednesday.

Three people have died after battling COVID-19 in Ottawa. The victims were in their 80s and 90s. OPH says there have been lab-confirmed cases of the virus in residents ranging in age from two to 97.

According to OPH, 18 per cent of COVID-19 patients have needed hospitalization, including five per cent in intensive care. On Tuesday (April 1), the health agency said 11 local coronavirus cases have been resolved.

The most common exposure settings for Ottawa COVID-19 cases include:

Too many residents still not following gathering orders

OTTAWA – The mayor of Ottawa is fed up with the number of residents skirting the no-gatherings provincial bylaw instituted to help reduce the spread of COVID-19.

The city is warning residents stiff fines will likely soon be handed out if people continue to congregate in city parks and hold gatherings.

City officials say Ottawa bylaw officers have recently been called to several parks where groups of 20 or more were gathered, as well as a yard sale in Greenboro and a child’s birthday party with more than a dozen children in attendance.

“We’ve got to get people to think this is not just a suggestion, that you not go out and gather in groups of more than five; it’s actually now the law,” Mayor Jim Watson said.

Provincial law during the current state of emergency limits gatherings of no more than five people, or 10 in the case of a funeral.

City officials urge residents to stay home as much as possible, regardless, and reiterated the fact city parks are closed to all uses except for walking through.

“We all know, or should know, and the city and Ottawa Public Health (OPH) will continue to pump out the message we should not be gathering in the parks or other public spots,” said Coun. Keith Egli, the chair of OPH.

The mayor says as far as he’s aware, bylaw officers have not yet handed out any tickets to people gathering in groups but says he suspects that will change in the next couple of days.

Premier Doug Ford says the mass mobilization of government, businesses and people to slow the spread of COVID-19 is one of the most ambitious efforts undertaken by the province in generations.

The government says the Ontario Together Fund will go to the most viable, innovative proposals that can quickly provide medical supplies and equipment, including gowns, coveralls, face shields and ventilators.

The province has worked with the Automotive Parts Manufacturers’ Association to get ventilators produced and Ontario recently ordered 10,000 of the machines from O-Two Medical Technologies. 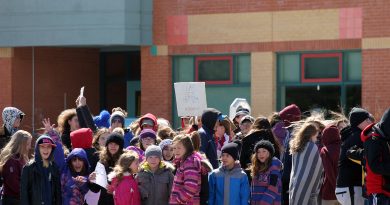