The EOSHL regular season was on pause due the rise of the Omicron variant and provincial regulations surrounding gatherings and recreational sports. The Rivermen last played Dec. 18, 2021.

Early in January, the league owners started discussing its options for the remainder of the season. Last Wednesday (Jan. 26), the Rivermen broke the happy news to their fans.

“We are back baby,” the Rivermen released in a statement.

“The EOSHL is preparing to hit the ice after a little time off,” the league executive released in a statement Friday (Jan. 28). “The first ever EOSHL weekday game will kick us off on Monday Jan.  31with Frontenac at Deseronto facing each other. The league has only a handful of games to confirm to have the revised schedule complete. The teams will end up with an 18-game schedule instead of 20. We hope to see you all at the rink.”

The Rivermen’s Feb. 5 game will be against the red-hot Tweed Oil Kings at the Bert Hall Arena in Arnprior in a battle for second place in the EOSHL West Division.

The top for teams from each division make the EOSHL playoffs and with four games left on the proposed schedule, the Rivermen have a 10-point lead over the Deseronto Bulldogs (3-7-0-1-1) who sit in fifth in the six-team division.

The remainder of the Rivermen’s schedule includes a road game in Vankleek Hill versus the Glengarry Pipers.

The Rivermen return home Feb. 19 for a noon game against the Frontenac Phantoms and finish the season at home against the Gananoque Islanders. 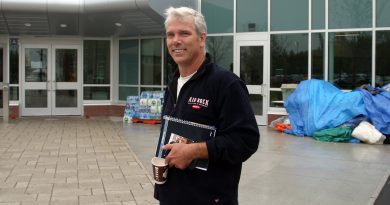