WEST CARLETON – The West Carleton Rivermen lost both of its regular season games over the weekend while the West Carleton Secondary School boys non-contact team wins in the playoffs yesterday (Nov. 24).

The Rivermen had a tough weekend, playing short-handed and losing against the Eastern Ontario Hockey League’s (EOSHL) best team Saturday (Nov. 20) before running out of gas Sunday (Nov. 21) afternoon against the league’s hottest team.

Brothers Andrew and Michael McKenney led the way for the Rideaus with five points and two goals spread out between them.

Carp’s Ryley Egan scored the opening goal of the game for the Rivermen. Egan now has six goals and 16 points in 11 games this season.

The Rideaus would score the next four goals, before the Rivermen would stage a bit of a comeback late in the second period starting with a Blake Forslund goal from Galetta’s Adrian Moyes.

Alex Hulford would score at the 12-minute mark of the third period with Egan picking up his second assist of the game, but the Rideaus would hold on for the win. The Rivermen fired 18 shots on goalie Carmine Guerriero in the third and 41 in total.

The Rivermen had a short bench for the game with only 14 skaters and one goalie.

The following afternoon, fatigue caught up with the Rivermen who would lose 8-5 to the Tweed Oil Kings (6-2-0-1-0) in a game that started 16 and a half hours after the Rivermen’s last game.

Tweed is one of the hottest teams in the league now that they are playing games. A quirk in the schedule and the Oil Kings have only played eight games compared to the Rivermen’s 11. The Oil Kings have a .750 win percentage in those eight games. The Rivermen, after the weekend losses, still sit in second in the EOSHL West Division, but the Oil Kings are now only one point behind. The top four teams from each division make the playoffs.

Around 200 fans filled the Municipality of Tweed Community Centre to take in two of the EOSHL’s best Sunday afternoon.

Egan was an offensive factor again scoring two goals and adding two assists earning the second star in the defeat. Defense was out the window as the Oil Kings registered 59 shots while the Rivermen fired off 48 shots.

Moyes, Hulford and Kanata’s Greg Harding also scored for the Rivermen. Once again, the team went to battle with only 15 players.

“Tough weekend for a short benched Rivermen team,” Rivermen coach Mike Byrne released in a statement last weekend (Nov. 21). “The boys who were able to make it battled hard both games but unfortunately just ran out of gas. Back at ‘er next weekend in Frontenac.”

Following this weekend’s game on the road, the Rivermen are back home for their first afternoon game of the season, a Dec. 5 2:30 p.m. rematch against the Rivermen’s “new rival,” the Rideaus, and it’s going to be minor hockey night.

“For this game we are going to do a minor hockey night to get all the young fans out to watch some quality hockey,” the Rivermen released in a statement. “The game will be free for all kids under 18 who are wearing their minor hockey or ringette logo, or if they don’t play minor hockey or ringette’ then if they are wearing any logo of any hockey team. As long as they are accompanied by a paying adult. We are playing against our new rival the Smiths Falls Rideaus. Who also happen to be in first place in our conference. Come support your local senior A hockey team and pack the stands for what is sure to be an amazing afternoon of hockey.”

Proof of vaccination is required to enter the arena.

Also catch the Rivermen on Dec. 4 from 2 to 4 p.m. at the Nick Smith Centre for the Arnprior Santa Claus Parade “where we will be giving away some treats for the local kids and maybe even some Rivermen swag.”

WCSS Wolves move on in playoffs

It’s been a great season for the Wolves who have a 5-1 record heading in to the NCSSAA semi-finals on Nov. 30 against Earl of March at the Mlacak Arena.

The Wolves played a tournament a regular season tournament on Oct. 25 where the team went 2-1, its only loss, 5-1, against Earl of March. On Nov. 17, the team played another tournament on Nov. 17 going 3-0. 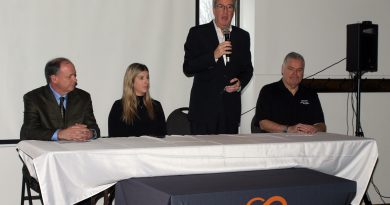 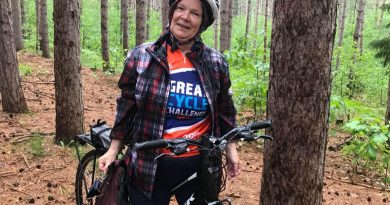