WEST CARLETON – What a great start to 2020. West Carleton Online stuck to its New Year’s resolution to work harder than ever and we were rewarded with a tonne of eyeballs in January.

In the first month of the New Year we published 138 stories. Well more than half of them exclusive to West Carleton Online. Those stories don’t include our local obituaries or our jam-packed events calendar. That makes West Carleton Online the Number One source for news and information in our community. And it’s not even close.

That hard work paid off as West Carleton Online hosted a huge crowd in January. We had 8,512 users who combined for 19,488 pageviews. You know the drill. Here are our Top Stories of January 2020 as picked by our readers based on story pageviews. Following that we’ll share our Editor’s Picks for January. Three stories that didn’t get the number of pageviews our top stories did, but we thought were pretty good and you may have missed the first time around.

1. Highway 417 exit at March Road getting traffic lights, turning lane (1,890 pageviews): Transportation is a huge topic of conversation in West Carleton. We’ve written numerous stories on public transportation, but the Number One issue often mentioned to us by Coun. Eli El-Chantiry is roads. West Carleton is a commuter community. So, this Jan. 15 news of improvements to this very busy junction was immediately popular and is already a contender for our annual Top Stories list. Amazingly, West Carleton Online was the only media outlet to cover this story.

Visits suspended at Arnprior hospital due to respiratory illness outbreak

3. Carp corridor break-in now has photos (700): West Carleton has one of the lowest crime rates in the City of Ottawa. So, when it happens, it’s big news. West Carleton Online spoke to Const. Amy Gagnon on Jan. 7 about the crime. Ottawa police updated the story a couple of weeks later stating the suspects had been identified but the investigation is still ongoing.

4. Two young stunt drivers caught on Dunrobin Road (643): This Jan. 24 news story is a great example of how West Carleton Online’s data tracking can shape our news coverage. It was a story only we had. The interest from our readers and commentary on our social media feeds showed us many area residents think speeding on Durobin Road is an issue. So now we have a call in to the Ottawa Police Service’s traffic enforcement department to get some more input on this potential issue from the subject matter experts.

5. Insurance issues keeping WC snowmobile trails closed (261): West Carleton Online broke this story Jan. 27. It’s so late in the month, it probably had several more clicks in early February. Some startling snowmobiling stats released by the Ontario Provincial Police showed why getting insurance for snowmobile clubs is an increasingly challenging proposition. The good news is the clubs, the City of Ottawa and insurance providers have reached an agreement and all of West Carleton’s snowmobile trails are now open. We are the only one to report on that, by-the-way.

1. Challenging start to WC ODR season (Jan. 30): West Carleton loves its outdoor rinks and outdoor skating. We are lucky to have an outdoor rink in six of our largest communities. We also have rinks on rivers and ponds and in backyards and neighbourhoods. We even have the amazing West Carleton Outdoor Hockey League. In this story we spoke to Corkery Rink Boss Andrew McIsaac during the community association’s annual outdoor rink festival Hockey Day in Corkery about the struggles and challenged of maintaining an ODR in 2020.

2. Warriors play shinny, meet Borowiecki (Jan. 27): Another outdoor rink story, another West Carleton Online exclusive. This time in Carp. The Canada-famous peewee West Carleton Warriors were spending the day together during a PA Day off from school. It involved shinny in Carp and a trip to a West Carleton Rivermen game. What wasn’t planned was a surprise run-in with one of the Ottawa Senators most popular players, rugged defenceman Mark Borowiecki. On an aside, we must have checked the spelling of his name 20 times and were still not sure we got it right.

3. Eli looks forward, back (Jan. 3): This story actually was well-read and did finish in our Top 10 pageviews. We enjoyed it for many reasons. It’s always great to get a long interview with West Carleton’s municipal representative and do a wrap-up of the year that was. Our publisher has covered Coun. Eli El-chantiry since before he earned the title councillor dating back to 2001. What we really liked about the story was the photo. It was great to interview the councillor in The Lighthouse, the restaurant he used to own, and take a profile photo of the councillor from his old perspective – behind the counter. 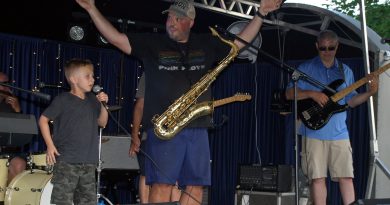 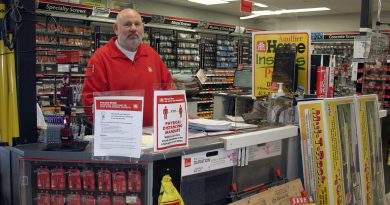