CARP – 2020 is the year that just won’t give up. The COVID-19 pandemic, which touched down in Ottawa on March 11, has cancelled every single community gathering in West Carleton this spring, summer and fall.

For the Carp Fair, the pandemic has cancelled nine of their popular events as well as the 157th edition of The Best Little Fair in Canada. But last night (Sept. 26) the Carp Agricultural Society (CAS) was able to shine as brightly as it ever has.

What has been Carp Fair weekend for 156 years, became a much more symbolic event in 2020. The fair could not be held for fear of spreading the deadly novel coronavirus. The CAS wanted to mark an event that means so much to so many people in West Carleton and draws around 60,000 people to the are the fourth week of every September. Starting last weekend, the CAS hosted the Carp Fair 2020 Showcase – a week long celebration of the traditional Homecraft and Agricultural Division skills competition showcasing the amazing talent in the rural arts found in the community.

The CAS asked residents enjoy the show from their homes, but the weather was cooperating, and a very mild Saturday evening drew at least a couple hundred to the Carp Road area. A donut truck did brisk business outside of Alice’s Village Café.

For many, it was a desperately needed chance to take their COVID-19-focused minds off the issues of the community, and the world.

“I didn’t care if we had to walk to Carp, we were going,” Fitzroy Harbour resident Carrie Foster told West Carleton Online minutes before the show started, just outside the Carp Fairgrounds gates. “We needed to get out.”

Across the street, set up in folding chairs on The Hive front yard, were Kim, Jim, Hayden, 5, and Shyanne, 7, Hook ready for a show.

But the moment of the Carp Fair being cancelled for the first time in 150 years wasn’t lost on the Carp family.

“I think I’ve only missed about three in my life,” Jim said. “It’s nice they are able to do something.”

Shyanne is also a regular at the fair. She likes “the games, because you can win a stuffie.”

Hayden remembers making a necklace and entering it in the junior division.

“Last year we got in early and did all the rides before people started coming in,” Jim says of the family fair strategy. “It was great.”

The show was a full 25 minutes long, lighting the Carp sky above the fairgrounds. The crowds cheered for their favourite bursts and gave a hearty applause following the show.

Bridlewood’s Connor Murphy, 9, came in from Kanata for the fireworks.

“They were the best ever,” Connor told West Carleton Online. “Loud, but good.”

He often comes in with his mother for the fair too.

“It’s pretty fun,” Connor said of the fair. “I mostly like the bumper cars.”

Following the fireworks show, something Carp Fair regulars are used to, the annual Village of Carp traffic jam was held as motorists headed home from the event. West Carleton Online headed out via Donald B. Munro Drive. Small gatherings were witnessed along the route as far as eight kilometres away enjoying the evening and the Carp Fair.

One thought on “The Carp Fair shines” 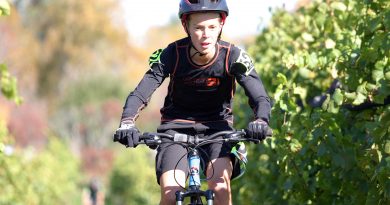 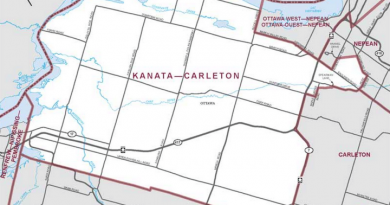 Mark: Looking at a spring election