KANATA-CARLETON – Provincially, West Carleton has been blue for a very, very long time.

Political newcomer Shahbaz Syed hopes to turn the community Liberal red for the first time in more than 100 years on June 2 after winning the nomination last December.

While the writ has not yet dropped, he and all provincial candidates (except the Green Party that does not have a candidate in place in Kanata-Carleton at this time) have already been campaigning for weeks. Last Sunday (April 24) Syed hosted his campaign office opening and a fundraising dinner – an Iftar as the practicing Muslim observes Ramadan this month.

It’s been a busy start for Syed, and it will be a very busy month and a bit if he wants to change more than 100 years of political history in West Carleton.

Through four riding changes and eight different Conservative representatives, West Carleton (and whomever they shared the riding with) have voted blue consistently since 1923 starting with Adam Acres.

From 1923 on, in the Carleton Riding, following Acres, Donald Morrow, William Johnston, Sid Handleman, Robert Mitchell and Norm Sterling represented the riding as Conservatives until 1999. Following that, the riding changed to Lanark-Carleton in 1999 and Sterling won two more elections in that riding.

In 2007, the riding changed to Carleton-Mississippi Mills and in 2014, MacLaren’s Landing’s Jack MacLaren took over for Sterling in 2011 under the Conservative banner. MacLaren would win the 2014 election as well, but midway through was booted out of the party and joined the Trillium Party while still representing the riding.

That did not bode well for MacLaren in 2018, as the newly formed riding of Kanata-Carleton selected new Conservative candidate Dr. Merrilee Fullerton to represent the riding in the provincial government.

Now Syed will try to do what has proved a challenge for Liberals for more than a century and win the riding.

“Politics is definitely a social service as well as a public service,” Syed told West Carleton Online from his Centrum campaign headquarters on Tuesday (April 26). “It’s very rewarding and really challenging as well. Especially if you are a new candidate. You have to take an uphill challenge, you have to introduce yourself, your party’s polices as well, to the people you are hoping to represent. It’s an uphill task, but I am very fortunate to have a dedicated team of volunteers, successfully fundraising, connecting with people, and listening to them.”

When Syed, his wife and four children arrived in Canada in 2010 they settled in North York before moving to Kanata three years later.

“My new job brought me to Ottawa at the time,” he said. “I looked around and found Kanata to be a very nice place to settle in, primarily because of the high quality of schools it had. I thought West Carleton and Earl of March are two good schools. That was my primary reason to move to Kanata, and since then I’ve fallen in love with the place. People are so welcoming and so friendly. You can see how Kanata is relevant to Ottawa in general and how it is for all of Ontario. We pride ourselves in the largest high-tech cluster outside of Silicone Valley. So that’s a big advantage we have here in Kanata. I think going forward we have this huge advantage in Kanata with this technology park and we can position it to attract more talent, more investment, and more jobs for people in Kanata.”

Syed says he is a finance and risk management professional. Two of his children go to Ottawa’s two universities (which creates some debate at the dinner table), his daughter attends Earl of March and his youngest goes to Kanata Highlands.

Syed says he has worked in multiple jurisdictions inside and outside of Canada.

“I have travelled quite aggressively around the world to more than 45 countries,” Syed said. “What you get from travelling that extensively is you get a feel for how diverse the world is and how beautiful the world is. If you are unable to move out of your comfort zone you might not be able to see the potential, the beauty on the other side. I had this opportunity and privilege to do this because of my job.”

Syed says he is somewhat familiar with West Carleton, volunteering his time during the 2017 and 2019 flood as well as the 2018 tornado. His son’s youth soccer career also brought him to West Carleton often.

“We had matches in West Carleton, Smith Falls, all over the rural areas,” Syed said. “Fitzroy Harbour, wherever soccer was played, I accompanied him. I enjoyed the serene environment, sitting on the side watching my son play with his friends enjoying the beauty of the environment. Some of my friends have small businesses in Carp, I’ve been in touch. I’ve attended the garlic festival at the Carp Farmers’ Market. I grew up in a rural setting as well. I deeply value the family traditions, connections with the community, and the essence of brotherhood, especially in the tough times.”

But he has yet to visit the community on official campaign business yet.

“We have many doors to cover,” Syed said. “We have started from south and are moving north. In the coming weeks we’ll be hitting Kanata Lakes and further up to Dunrobin, Constance Bay, Fitzroy Harbour and Carp.”

But Syed is learning about the riding, marked by two unique industries with high-tech in the south and agriculture in the north end.

“The pandemic has really reinforced the importance of agriculture, especially for us,” Syed said. “When the supply chains were disrupted and the food shortages were happening, that’s the time when you need to have sustainable and strong agriculture to support your own population. Our riding plays an important role in food security, and I think if we look around us, I think we are fortunate to have a lot of farms producing staples and commodities, and the vegetables and fruit that go on our dining tables. The riding’s agricultural backbone is very dear to us, so I’m really proud and thankful to all agricultural families who make it possible for us to enjoy the food on our tables especially in these tough times. The market is important as well. The producers are bringing it to the markets and our growing population in Kanata are very fond of buying local and supporting local businesses. I think the two work very well together.”

Syed is also learning about the issues affecting West Carleton.

“I’m aware of the fact that broadband connectivity over the years has not been that great,” he said. “When I was doing some phone calls talking to the rural people of the area, I had this firsthand conversation with many about their sloppy Internet. It affects their daily lives, their ability to perform their jobs, their academics, and connectivity as well as social animals. Internet can be the main connection between loved ones. I think going forward, if the Liberals are trusted by the people to govern, this is something we’ll be looking to support.”

With no writ dropped yet, the party’s official platform hasn’t been released either, but Syed expects it will cover the issues currently important to Ontarians when it comes out in May.

“What you will see is a very relevant, very interesting, and very useful party platform,” he said.

So, Syed is focusing on meeting the community and preparing his battle plan which included a very successful campaign headquarter opening last Sunday.

“We also had a very effective campaign blitz that day,” Syed said. “We had 10 to 15 volunteers out and knocked on 700 doors that day. We were honoured that Jenna (Sudds) joined us. We had about 40 or 50 people supporting us at the time of the launch and later that night had a very successful fundraising dinner. We were able to raise, a visible amount of money to support our campaign. We reached the stage we wanted to in terms of our fundraising needs. At the moment, we are very well funded for our campaign.”

And on Monday (April 25), Syed participated in his first candidates’ meeting. The Ottawa Health Coalition, a local healthcare advocacy group, hosted a town hall with each party invited to send an Ottawa-area candidate to discuss healthcare-related campaign promises.

“It was last minute, but another candidate was supposed to attend the Ottawa Health Coalition debate (April 25), but he wasn’t available, so I attended that and it was a good experience,” Syed said. “We had a reasonable turnout, and I represented my party and we were able to share the number of reforms and initiatives the Ontario Liberals will be taking beyond June if we are able to win. Things we are able to institutionalize which will help acute care, long-term care and home care.”

Now that the campaign headquarters in open; fundraising and a campaign team in place; and a bit of debate experience in the bank, Syed can focus on meeting the people he hopes to represent.

“I can commit myself to always be available to listen to concerns,” he said. “Even if I am unable to solve the issue, I am able to talk about it and share those concerns.”

One thought on “Syed ready to turn Kanata-Carleton red” 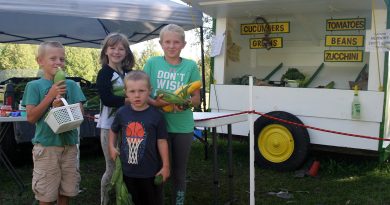