WEST CARLETON – Residents in West Carleton are some of the 10,400 in west Ottawa without electricity following a strong, early evening thunderstorm today (June 29).

Hydro Ottawa is currently working to restore power to its customers in the West Carleton, Kanata and Stittsville areas after the storm rolled through bringing high winds with it.

Hydro Ottawa first reported outages around 6:42 p.m. Saturday. The utility hopes to have power restored to all affected residents by 1 a.m. (June 30).

“To our customers in Kanata North, West Carleton-March, Stittsville, Osgoode, Rideau-Goulbourn, Kanata South, we’re aware of the power outage and crews are responding,” Hydro Ottawa said on its Twitter account. “Hang in there, we’re working to restore ASAP.”

Environment Canada issued a severe thunderstorm warning for the capital region just before 6 p.m. forecasting the storm could pack winds up to 100 kilometres per hour as well as hail.

Just before 8 p.m., Environment Canada added “conditions are favourable for severe thunderstorms to develop this evening.”

Severe thunderstorm watches are issued when atmospheric conditions are favourable for the development of thunderstorms that could produce one or more of the following: large hail, damaging winds, torrential rainfall.

Bruce Power commits 600,000 pieces of PPE to province in fight against COVID-19 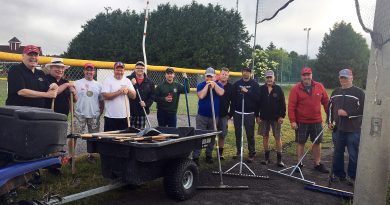