WEST CARLETON – For the second year in a row, Canada Day was a quiet, private affair in West Carleton due to the COVID-19 pandmic.

Public celebrations were cancelled or moved online as the country celebrates its second consecutive birthday in the age of COVID-19. The recent discovery of more than 1,000 children’s remains found at former residential schools over the last few weeks have also inspired a significant number to forego Canada Day celebrations all together in 2021.

In pre-COVID times, Canada Day was widely celebrated across West Carleton. There was a popular seniors’ breakfast in Carp; afternoon-long celebrations in Corkery and Dunrobin; the Legion in Constance Bay celebrated as well as the Diefenbunker and Carp Famers’ Market. It was a big deal.

COVID-19 changed all that. But yesterday, West Carleton Online was able to track down two celebrations for Canada’s 154th birthday – one new and one old.

On Carp Road near Kinburn Side Road, the Borg family was able to continue their long-running tradition of painting a Canada Flag on the Carp Road.

Ken and Judy Borg’s tradition dates back to 1992 during Canada’s 125th birthday when they lived in Fitzroy Harbour. When they moved to Carp Road, they eventually brought the tradition with them. The event was always a celebration with friends and family, but last year that changed due to the COVID-19 pandemic.

West Carleton Online spoke to the Borgs last year, while at the time, the pair also spoke about their own bout with COVID-19 which they were diagnosed with early in the outbreak in March 2020.

Last year they wanted to continue the tradition but did so under strict protocols. At the time, no more than 10 were allowed to gather. So, the flag was painted in shifts.

That ended up being the same for this year, something Ken did not expect at the same time last year.

“Did not even want to consider another whole year impacted by the pandemic, I have good confidence we can have a celebration feast next year,” Ken told West Carleton Online today (July 2).

Ken, who spoke of the long-lasting side-effects of his original battle with COVID-19, says he believes his vaccination played a role in finally returning to ‘normal,’ health wise.

“I had my first vaccine May 2, most of my remaining COVID-19 symptoms disappeared in the following week,” he said. “Had my second vaccine last week, for the first time in 15 months I can say I feel normal, that’s one of the reasons I had to celebrate yesterday.”

“Like last year, I scheduled three shifts of painters in one-hour slots, without overlap, to stay well within provincial restrictions,” Ken said. “Luckily no rain yesterday afternoon and the temperature was ideal. Looking forward to a full participation event next year.”

While Branch 616 celebrates Canada Day every year, with so many legion members a part of making Canada what it is, this year the celebration was not in person. The branch hosted a special Thursday (July 1) edition of its mega-popular Meals to Wheels take-out dinner program.

The twice-monthly take-out dinners have sold out every time since the program’s inception and Canada Day was no different. Although the work that went in to it was priceless.

Legion volunteers Rick Metcalfe and Barry Milks were up at the crack of dawn and at Branch 616 at 5:45 a.m. preparing two 70-pound pigs and three roasts for the evening’s dinner.

The pigs were smoked in a portable electric smoker brought in for the special dinner.

Official pig carver Coun. Eli El-Chantiry showed up around 4 p.m. to carve the meat while an army of other legion volunteers prepared the sides and packed the food. The legion usually prepares around 150 meals per event.

“The dinner was just excellent,” Woodlawn resident and regular Nicole Bijkerk posted on social media. “Thanks so much for everyone’s hard work. Always appreciated.” 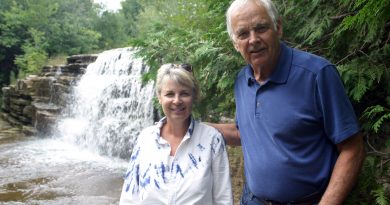