ARNPRIOR – It was a bit of revenge left way over from the 2020 Eastern Ontario Super Hockey League (EOSHL) championship finals but more importantly, the Arnprior Rivermen’s 5-4 win over the Deseronto Bulldogs last Saturday (Nov. 5) put the Rivermen back in a playoff position.

The Rivermen (3-3-0) were playing a rare evening game at home in the Nick Smith Centre against the Bulldogs (3-4-0) who were one point ahead, in the final playoff position in the EOSHL West Division as the season heads towards the midway point.

The Bulldogs opened the scoring and closed the scoring in the first period, but the Rivermen sandwiched two goals, one from Arnprior’s Jesse Dick and one from Galetta’s Adrian Moyes. The Rivermen had a three-goal second period with Nepean’s Brett Ashton and Stittsville’s Alex Hulford scoring and Dick getting his second of the night.

Patrick Killeen would play his first game as goalie for the Rivermen and the 6’4” Almonte native would face 60 shots in the game, letting in four of them but still earning the first star. Killeen played in the Ontario Hockey League for the Brampton Battalion before playing professionally in the American Hockey League and the East Coast Hockey League.

Getting back in to playoff position was important.

“The win last weekend was huge, especially considering the adversity we faced being short for half of the third period,” Rivermen coach Mike Byrne told West Carleton Online today (Nov 10). “That said, the team took it to another level, and I hope we can continue to build off that.”

One thing that has plagued the Rivermen this season is consistency. The team has yet to win two games in a row. Heading in to the season, there was a lot of changeover from the previous year. Byrne says the team is getting there.

“I think the consistency will come with time,” he said. “More than half our team are in their first year with the team, so it’ll take time to build chemistry. Once guys have had the chance to play together for a few games, I think we’ll show a lot more structure.”

The game was also quite scrappy. The Rivermen haven’t been in a fight all season, but three broke out in last weekend’s game.

“The gamesheet shows three but after discussion with the league, Eric Lanciault’s wasn’t deemed a fight,” Byrne said. “Funny that we had three in the third period after not having any all season to date.”

Byrne says it might have something to do with the team re-acquiring Brett Ashton last week.

“Ashton’s brought the boys a lot of energy, which is the exact reason we re-acquired him,” Byrne said. “Carter Peck didn’t really have much of a choice, as the other player took an instigator, but he stood his ground and showed he is a tough player. Don’t expect to see many fights from our group, but also, the boys showed that we won’t be pushed around.”

Next up for the Rivermen is another opportunity to leapfrog a team in the standings as the Smith Falls Rideaus (4-4-0) come to the Bert Hall Arena in Arnprior. The Rideaus sit in third in the EOSHL West Division just one point of the Rivermen.

In fact, if things break the Rivermen’s way this weekend, the team could find itself alone in second in the division. Last year’s EOSHL champions, the Tweed Oil Kings (4-3-0) sit in second with eight points and face the Bulldogs this weekend.

But Byrne says the Rivermen are focusing on what they can control.

“To beat the Rideaus, we have to be at our best and we have to limit our mistakes,” he said. “That is a very good hockey team, and they have a lot of experience playing together. We’ll have to remain disciplined and focus primarily on the defensive side of the puck. It should be a great game, and it’s two points that would be big for us in the long run.”

Mask mandates at most places set to lift Monday 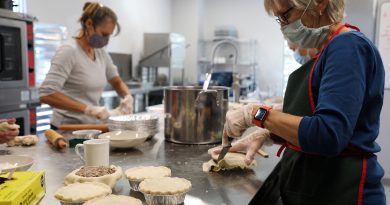