ARNPRIOR – A 1-3 record in a busy December was not the way the Arnprior Rivermen wanted to end the year, but they will start 2023 in a playoff position and masters of their own destiny down the final stretch of the 2022-2023 Eastern Ontario Senior Hockey League (EOSHL) season.

After finally defeating Gananoque on Dec. 2, the Rivermen (7-6-1), owned by Galetta’s Adrian Moyes, lost three straight games to the North Dundas Rockets (13-0-0), Gananoque Islanders (9-3-0) and Smith Falls Rideaus (7-6-1), before ending the losing steak last Saturday (Dec. 17) in the second half of a back-to-back, home-and-away match against the Rideaus.

The Rivermen will end 2022 in third place in the EOSHL West Division, tied with the Rideaus and behind the Islanders and the Tweed Oil Kings ((8-4-1). The top four teams in the six-team division qualify for the playoffs.

In the three losses, the Rivermen were outscored 24-13. Rivermen coach Mike Byrne says the losing streak wasn’t due to lack of effort.

“I’d argue we deserved a better fate in the losses against North Dundas and Gananoque,” Byrne told West Carleton Online today (Dec. 22). “Against Smiths Falls, we just did not capitalize on our opportunities. That said, I think the losing streak was a bit of a wake-up call, as Saturday’s win was arguably our most complete performance of the season.”

That win against the Rideaus was a 4-3 overtime victory. In the game, the Rivermen came back from two one-goal deficits to win. Joshua Snider scored two goals and Carter and Cole Peck scored the other two goals.

The Rivermen’s next game isn’t until Jan. 7, on the road against the Oil Kings who sit just above them in the standings. After back-to-back games and four games in three weeks, Byrne isn’t sure if the break will be good or bad for the team.

“It’s hard to say,” he said. “After the way we played Saturday, you want to get back on the ice and build off that. However, we’ve had a few players out a few weeks in a row, so hopefully the break boosts attendance.”

“I think that we have to take each week a game at a time,” he said. “No looking ahead, no looking back, just focus on the task at hand. The league has shown anyone can win on any given night. We can’t overlook any teams, and we certainly can’t go into games thinking we are an underdog. Getting a Top 2 seed, and first round playoff bye would be huge.”

Despite that, Byrne says he doesn’t have anything in particular on his Rivermen wish list for Santa.

“There really is not much more that I can ask for,” Byrne said. “The team has been great, and I think we have definitely performed better than our record shows. Here’s hoping 2023 is full of health and bounces in our favour.”

To see all West Carleton Online’s coverage of the Arnprior Rivermen, click here. 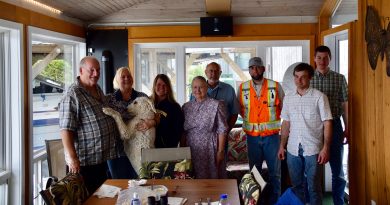