ARNPRIOR – The West Carleton Rivermen’s first Eastern Ontario Super Hockey League (EOSHL) regular season game since the COVID shutdown was a 5-2 statement win against the hottest team in the league.

A small crowd of roughly 30 people were treated to a great game Saturday (Feb. 5) night at the Nick Smith Centre as the Rivermen (9-5-0-2-1) leap-frogged the Tweed Oil Kings (9-3-0-2-0) in the EOSHL West Division standings re-capturing second place from the league’s hottest team.

“Saturday was a huge win and arguably our most complete game of the season,” Rivermen coach and general manager Mike Byrne told West Carleton Online today (Feb. 8). “Our four lines were all going, our defence played very well in our zone and Erik Miksik was great in nets. I’m hoping we can build off that moving forward.”

Tweed got their first goal of the game in the second period five minutes in. Carp’s Riley Hennigar would get that one back for the Rivermen with assists going to Cody Warren and Carp’s Ryley Egan.

Poirier would add another goal from Stittsville’s Alex Hulford and Kars’ David Nelson. Hulford would score the final goal with an assist from Rheaume.

The Rivermen would also sweep the three stars with the team’s leading scorer Hulford (11 goals, nine assists) getting the first, Poirier the second and Nepean’s Brett Ashton getting the third.

While the win moved the Rivermen in to second in the west division, the Oil Kings are only one point behind and have three games at hand as the season winds down.

The EOSHL reduced the number of regular season games to fit the season in after the COVID shutdown, leaving the Rivermen with three games left. The Rivermen are on the road next week (Feb. 12) before returning home to the Bert Hall Arena for two afternoon games. The Rivermen play the Frontenac Phantoms on Saturday, Feb. 19 at 12:20 p.m. and the Gananoque Islanders on Saturday, Feb. 26.

Although the team will be in tough to hold on to second in the west, the Rivermen have almost clinched its EOSHL ticket to the playoffs. The top four teams of each division make the playoffs and the fifth place Phantoms have only seven points, but also has three games at hand.

Monday (Feb. 7) was trade deadline day in the EOSHL. The Rivermen made one deal to secure its defence heading in to the playoffs.

The team traded for Cornwall Prowlers defenceman Nathan Everett for a third-round pick in the 2022 EOSHL draft.

Everett played 11 games for the Prowlers this season with two assists and eight penalty minutes.

“Nathan Everett is a great addition, and we look forward to his impact on our defence,” Byrne said. “Everett gives us another great piece on defence. We had played against him earlier this year when he was with Cornwall, and I really liked his game. I’m looking forward to getting him into the lineup this weekend.”

The 21-year-old Russell native brings some good size to the Rivermen defence at 6’2”, 205 pounds.

Before joining the EOSHL, Everett played in the Central Canadian Hockey League (CCHL) the CCHL2 and the Ontario Junior Hockey League. 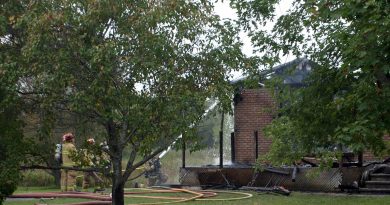